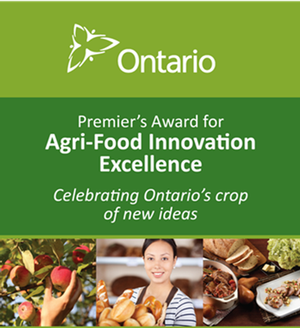 From a news release
Farmers, Processors and Organizations Recognized at Annual Awards and Summit

Stouffville-based Greenbelt Microgreens received the top honour of the Premier’s Award for developing an eco-friendly process to grow organic microgreens year-round. The company’s state-of-the-art facility grows nutrient-dense sunflower sprouts, pea shoots, wheat grass and other microgreens that can be produced on an average 10-day growth cycle, with a shelf life of 13 days.

The Minister’s Award was presented by Jeff Leal, Minister of Agriculture, Food and Rural Affairs, to Mississauga-based SunPillar Inc./Two Bridges Vineyards for developing Hive Health, a product designed to fit inside a standard commercial beehive that helps producers monitor bee health without having to disturb their bees.

Three Leaders in Innovation Awards were also presented to: