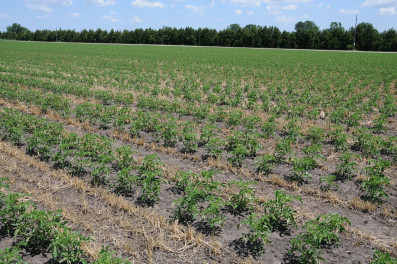 This Grain Farmers of Ontario research project, led by Dr. Clarence Swanton, of the University of Guelph, and the University of Waterloo’s Dr. Roydon Fraser, has shown that a corn plant’s leaf temperature can tell you whether that plant is healthy or not – and do so before the problem is readily visible.

Supported by funding from Growing Forward 2, they’ve been working on a proto-type sensor for corn that can rapidly detect changes in leaf surface temperatures.

This helps farmers identify and respond to plant stress like nitrogen deficiency or weed competition quickly and accurately, and often before any visual evidence of stress, like yellowing leaves, is apparent.

Four controlled environment trials using corn were completed in the University of Guelph greenhouse which let the researchers control inputs like water and nitrogen. Three outdoor field trials, two in Woodstock and one in Elora, were also conducted.

Swanton and Fraser observed that healthier plants had cooler temperatures during the day compared to plants lacking nitrogen or fighting weeds, especially when comparing low and high nitrogen rates. The results were less clear with nitrogen rates in the middle of the dose range, and more research will be needed to establish what is causing that variability.

Being able to identify stressed plants early, growers can target applications of nitrogen or crop protection materials precisely and rapidly, ensuring they’re only used where and in the quantities they’re needed – a benefit for both the environment and growers looking to manage costs.