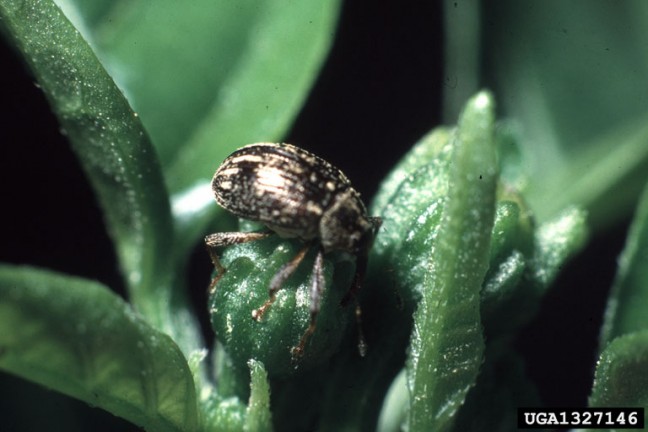 University of Guelph researcher Dr. Cynthia Scott-Dupree is testing a genetic control strategy that could bring much-needed hope to growers.

“Pepper weevils began causing substantial economic losses in Ontario in 2015,” says Scott-Dupree, a professor in the School of Environmental Sciences and Bayer Chair in Sustainable Pest Management. “There really aren’t any effective insecticides that control the adult, and the direct damage caused to the pepper is invisible until you cut it open.”

Adult female pepper weevils lay a single egg in a puncture wound on the surface of the pepper. When the egg hatches, the larvae chew into the pepper to feed. The adult emerges inside the fruit, feeds on the pepper a little longer, mates and then exits the fruit. And the cycle starts all over.

Scott-Dupree started working on sterile insect technique (SIT) about five years ago to control a leafminer in Ontario-grown chrysanthemums. She was then approached by Bruce Power about the potential to use gamma radiation to mitigate insect pest problems in Ontario agriculture.

“I steered them to the pepper weevil issue as I knew that growers were stuck for solutions,” she says.

SIT introduces sterility into a pest population as a way to rapidly reduce pest numbers. It’s been successfully used to control codling moths in B.C. apple crops and screw worm in U.S. livestock. In the case of the pepper weevil, pupae are irradiated so the developing males don’t produce viable sperm but look and act normal.

“We want the males to be sterile, but function and mate normally. That’s the magic balance we’re after,” she says.

If Scott-Dupree’s concept is successful, female pepper weevils would continue to lay eggs on the outside of the pepper, but no burrowing or further crop damage would occur because the eggs never hatch.

“The exciting thing about SIT is that it’s a process that will dovetail very nicely with biological control strategies in greenhouses. These sterile pepper weevils will not have any negative effect on anything else in the greenhouse,” says Scott-Dupree.

With support from the University of Guelph Gryphon’s Leading to the Acceleration Adoption of Innovative Research (LAAIR) program, Scott-Dupree is focused on identifying the effective dose of radiation, and how to rear enough pepper weevils in artificial facilities to provide sufficient populations of the sterile insects to growers.
It’s a part of a team approach with colleagues at the University of Guelph and Agriculture and Agri-Food Canada. As for commercializing the process, that’s still down the road.

“I doubt it will be hard to find a company that’s interested in commercialization, if we can prove the concept has potential,” she says.