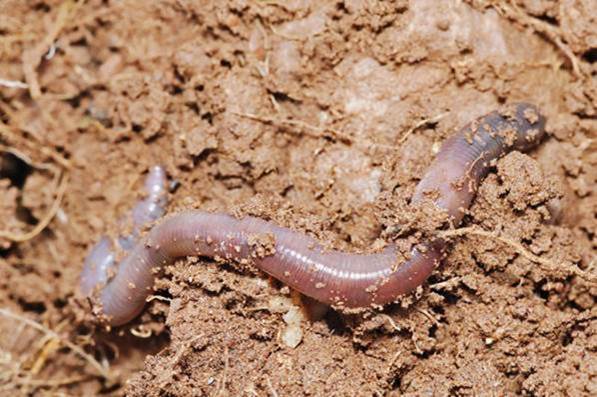 » Kim Cooper » Incredibly, Earthworms Are Not Native To...

Over the years, I have talked about many aspects of agriculture, from soybeans to 4-H to biotechnology to strawberries and everything in between.

But earthworms are something I’ve never discussed in these weekly articles. I want to express a huge thank you to Anne Verhallen, Soil Management Specialist with the Ontario Ministry of Agriculture, Food and Rural Affairs, for her valuable assistance and resources.

Earthworms were something we used as kids to go fishing with and to scare girls with, but these soil organisms are much more than that!

You wouldn’t want to step on one of the giant earthworms of Australia or Brazil, which can grow to 11 feet long and weigh up to one pound!

Earthworms are one of the most popular forms of live bait for fishing. Gardeners hold them in high esteem as nature’s plowmen. Folklore tell of their medicinal uses. Some work in organic matter decomposition. Biology students worldwide study their anatomy.

There are thousands of species of earthworms in the world but only about 20 in Canada. Earthworms are not native to our Great Lakes region of North America. The first earthworms probably arrived with soils and plants brought from Europe.

Earthworms are the ultimate “ecosystem engineers.” They change the fundamental processes of an ecosystem through their feeding and burrowing activities. They are the most easily recognized soil organism. Farmers and gardeners see them as a sign of a healthy soil.

Only a few decades ago, most farmers thought that earthworms were not that important for agriculture, and emphasis was placed on physical and chemical aspects of plant growth while biological aspects, which includes earthworms, were mostly neglected.

We again have come to realize how valuable the interactions between crops, climate, soil and living organisms, such as earthworms, play a vital role in sustaining our agriculture sector.

Earthworms, because of their size and numbers, and what they do in our soils, can have a positive effect on soil properties. If there are enough of them, they can have notable effects on soil structure (the arrangement of the solid parts of the soil and of the pore space located between them). Some benefits of earthworms include water infiltration, soil aeration, soil compaction, soil organic matter, and soil pH. Earthworms also excrete material that has high concentrations of beneficial microbes that help decompose crop residue.

Earthworms help to mix soil and crop residues, aiding in the breakdown of organic matter and the cycling of nutrients. They leave nutrient rich casts (feces) behind, coating the walls of their burrows. Plant roots often grow along or through worm burrows, taking advantage of the better soil structure, the high nutrient level, and the ease of root expansion in these areas. The burrowing increases the soil porosity and aids in the movement of air and water.

Since worms are important in our soils, here are a few ways to improve worm population:

• Reduce tillage or use a no till system:

• Use a varied crop rotation that includes forages and cereal grains:

There have also been reports of crews going into our area fields at night and picking hundreds of worms for the bait market. This is trespassing and not good for the health of our soils. So if you see people doing this, call the landowner and the police. We need more worms and not less.

Think about this – Never measure God’s unlimited power by your limited expectations.