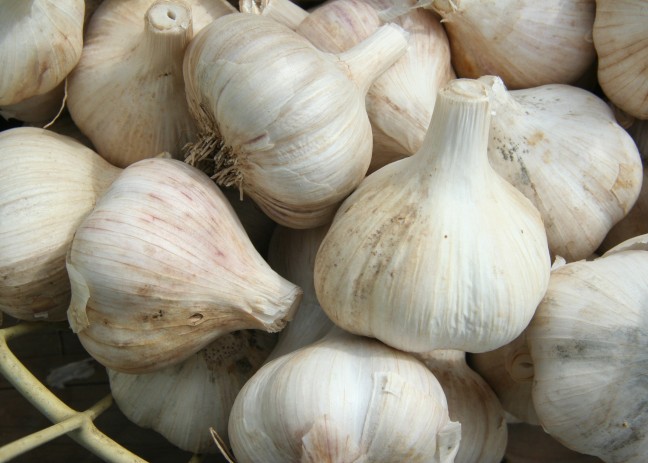 As consumers become more aware of the different tastes and culinary uses of unique garlic types, the demand for specific cultivar types will grow, and name recognition of various cultivars will increase. Last year we put out a request for garlic cultivars to be used for a trial to assess different growth parameters. We received six hardneck and three softneck cultivars, which were then planted in Mount Forest, Ontario, on October 19th, 2017.

We harvested the trial July 19th, 2018 and out of the nine cultivars, we found ‘Music’ to be the top cultivar when it came to early spring emergence, mid-season height, mid-season leaf count, as well as plant weight, circumference, bulb fresh and dry weight at harvest. The cultivar ‘Newfoundland’ was a close second when it came to dry yield and most other variables assessed. This cultivar was sourced from Newfoundland and the traits that were assessed were very similar to ‘Music’. During a blind taste test, four out of seven individuals noted that ‘Music’ was mellow while ‘Newfoundland’ was dull but then had a spicy finish.

Our hope is to expand the trial to multiple locations with different soil types as well as increase the number of cultivars in the study. If you have a named garlic cultivar that you would like to include in the 2018-2019 cultivar trial, please contact Travis Cranmer at 519 826-4963 or E-mail travis.cranmer@ontario.ca as soon as possible as the trial will be seeded in late September to early October.

EVALUATION OF GARLIC CULTIVARS IN THE 2017-2018 FIELD SEASON

METHODS
Garlic cloves of nine cultivars previously grown in Ontario were seeded by hand in Mount Forest, Ontario in Harriston loam, on October 19th, 2017. The treatments were Music, Georgian Fire, Ivan, Newfoundland, Russian Red, Yugoslavian Red as hard neck cultivars and Saba Gold, Messadore and Thermadore as softneck cultivars. The trial was arranged in a complete block design with four replicates. Each replicate consisted of one row (2m long) with ten plants. Post planting cloves were covered with one inch of soil and grown under standard cultivation conditions. Emergence was assessed 3 April, 2018 and mid-season plant height was measured 24 May. Scape stage was quantified 21 June by measuring the direction of the spathe in relation to the scape rising from the plant using a 0-2 scale where 0=no scape observed, 1 = one full loop and 2 = two full loops. The scape stage at 21 June reflects when the scapes would most likely be harvested and may not reflect the final scape stage.

The trial was hand weeded as necessary and plants were harvested and assessed on 24 July. At harvest, bulb basal plates were rated for damage by assessing the percentage of basal plate missing using a 0-4 rating scale: where 0 = no damage, 1 = 1 – 24% basal plate missing; 2 = 25 -50% basal plate missing; 3 = > 50% basal plate missing and 4 = completely desiccated bulb. All cultivars were not tested for bulb and stem nematode or virus load prior to planting. Bulbs were hung to dry in a mesh bag in a forced air drying shed shortly after harvesting for 12 days and dry weights were collected on 13 August. Data were analyzed using SAS version 9.3 (SAS Institute, Cary NC). Means were separated using Tukey-Kramer multiple mean comparison test (P = 0.05).

RESULTS
No differences were found between the cultivars based on emergence as of 4 April, 2018. Height assessment, 14 May, found Music, Ivan and Newfoundland to be significantly taller than the soft neck cultivars as well as Russian Red (Table 1). Significantly more leaves were identified in cultivars Music, Georgian Fire, Ivan and Newfoundland at this assessment than the other cultivars within the trial (Table 1). As expected, no scape development was found in softneck varieties Thermadore, Messadore and Saba Gold. Multiple Saba Gold plants had bulbil development from an immature scape within the stem causing the stem to burst and plant to lodge closer to harvest. Yugoslavian Red (20.8%) and Russian Red (9.1%) were found to be weak bolters with many plants showing no scape emergence. Ivan was the only cultivar to display scapes with a double loop while Music, Newfoundland and Ivan had scapes curl from 1 ¼ to 1 ½ times around from the stem. (Table 2). No cultivars displayed a straight scape and the umbel capsule/topset characteristics were not assessed.

Plants were harvested 24 July and assessments took place in the field. Fresh plant weight identified Music and Newfoundland to have significantly greater mass followed by Georgian Fire and Ivan (Table 3). Fresh bulb weight showed Music, Newfoundland and Georgian Fire to have the greatest bulb weight and diameter followed closely by Ivan. Messadore and Thermadore both showed small amounts of basal plate rot. Both Russian Red and Yugoslavian Red had a light purple sheath colour with Georgian fire showing pinkish-white with the rest of the other cultivars with a white sheath.

CONCLUSIONS
Music performed best relative to the other cultivars in the trial with regards to every parameter measured. Messadore had the best fresh weight out of all the softneck cultivars, however, it was not significantly different than the other two cultivars. Russian Red had the smallest bulb diameter and fresh weight at harvest.

Figure 2. Emergence was assessed 3 April, 2018 and was based on the percentage of plants per replicate showed signs of early growth.

FUTURE WORK
Our hope is to expand the trial to multiple locations with different soil types as well as increase the number of cultivars in the study. If you have a named garlic cultivar that you would like to include in the 2018-2019 cultivar trial, please contact Travis Cranmer at 519 826-4963 or E-mail travis.cranmer@ontario.ca as soon as possible as the trial will be seeded in late September to early October.

Funding for this project was provided by Growing Forward 2. In kind contributions were made by Simon de Boer of Langside Farms, Bob Romaniak of Brant County Garlic and Jeff Rundle of Northland Garlic. Thank you to Michael Celetti, Ashleigh Ahrens, Jordan Elshof, Josh Mosiondz, Cora Loucks, Angela Tiessen, Michelle Reid, and Laura Stoltz for their help throughout the trial as well as the support provided by the Garlic Grower Association of Ontario.

« SYNBIO AND VANILLA Some Interesting Ag Trivia To Ponder »