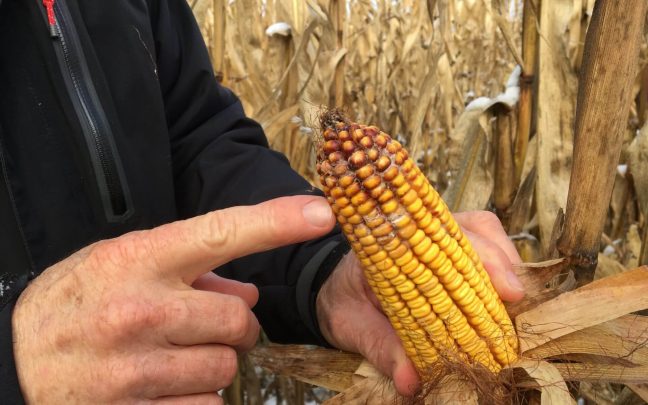 At its meeting on February 14, 2019, the Ontario Corn Committee (OCC) reviewed DON analysis results of samples collected from five performance trials in south-western Ontario in the fall of 2018.

Following this review, the OCC voted unanimously to issue a report which illustrates the relative susceptibility to DON accumulation of the 106 hybrids for which samples were collected. This report is in the final stages of preparation and should be available on GoCorn.net early in the week of February 18th.

There was a wide range in the DON level across hybrids, locations and OCC Tables. The test results were subjected to extensive statistical analysis which confirmed that some hybrids differ significantly in their susceptibility to DON. Some hybrids consistently had the lowest DON levels across locations, while others were consistently among the highest. The majority of hybrids fell into an average category with no significant difference between them. Thus, this report will not attempt to categorize the hybrids into groups according to their susceptibility to DON. Rather it will illustrate their relative susceptibility using a colour coding system ranging from green to red. The greener the colour assigned to a hybrid, the lower its tendency to accumulate DON. Hybrids coded yellow are in the middle and are more variable, and those coded orange or red are among the most susceptible.

It is important to note that none of the hybrids can be said to be “resistant.” Under conditions favouring Giberella, any of them can accumulate significant amounts of DON. However, the OCC believes that the information contained in this report will provide a tool to assist growers in reducing the risk of selecting hybrids that are among the most susceptible.

OCC also voted to conduct voluntary inoculated trials for rating hybrids for susceptibility to DON accumulation at Ridgetown and Ottawa beginning in 2019. Hybrids entered by the seed companies will be tested at both locations and will be rated based on two types of inoculation: silk channel and wounding (to simulate insect or bird damage). Use of inoculated trials ensures that all hybrids are subjected to the same level and types of disease pressure and provides data in years when there is little natural infection.

Results are to be available for review by the committee by the end of November 2019. Upon acceptance by the committee, the results will be reported publicly with hybrid names included.

Funding of these trials for at least the next two years will be coming from the Ontario Ministry of Agriculture, Food and Rural Affairs, Grain Farmers of Ontario, the seed companies (through entry fees) and donations from some end-users.

While it is a seed company’s decision as to whether to participate in these tests and which hybrids to enter, the OCC is strongly encouraging them to enter all new hybrids in the DON trials along with any existing hybrids that they expect to continue to market for 2020 and beyond. It is important that the entries in these trials represent as large a proportion of the corn acreage in the DON-prone areas of Ontario as possible.

It is the intent of the OCC that DON testing will be an on-going component of the hybrid testing offered by the OCC so that growers will continue to have an independent source of information to assist them in reducing the risk of DON contamination of their corn crops.