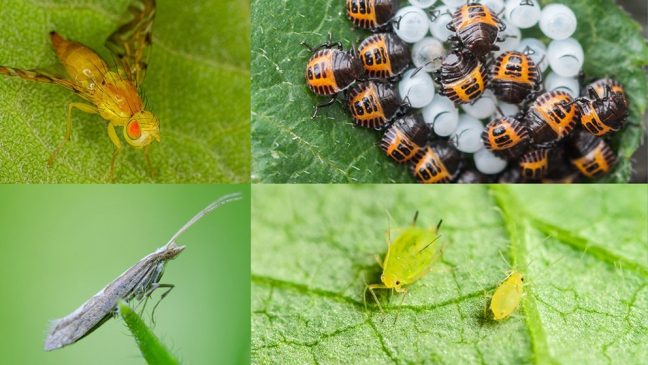 Experts say insect pressure this growing season will depend significantly on weather patterns from the United States. And while that’s a huge variable, growers can nonetheless take measures to reduce insect damage by being aware of their arrival.

Extreme weather conditions that have increasingly been seen worldwide can boost their numbers. These conditions include excessive wind patterns coming up through the Mississippi River Valley, which can bring extraordinary numbers of pests.

The uncertainty of when and where pests will be a problem makes insect monitoring vital, says Jordan Bannerman, an entomologist at the University of Manitoba. Being on top of pests’ emergence or arrival can be crucial for their control.

Monitoring offers some predictability for grasshoppers, thanks to a Prairie-wide grasshopper survey active since the 1930s that offers an annual forecast. For 2019, it’s estimating very low pressure in Saskatchewan, some hot spots in Alberta – around Lethbridge and south of Lloydminster – and a mixed bag for Manitoba, with low counts in most regions but moderate counts in the central region and around Winnipeg.

That forecast is based on actual adult insect counts in fields. While the forecast provides a general outlook, grasshopper numbers in the following year can be influenced greatly by moderate fall weather, during which time grasshoppers continue laying eggs that will hatch in the spring.

The other insect on Bannerman’s main watch list is flea beetles for canola. While most producers use insecticide-treated seed, slow emergence due to weather might put the plant at risk if there is beetle pressure before the 2.4 leaf growth stage.

A few Prairie insect pests expand their range annually, and some growers may soon find themselves dealing with pests they have not previously encountered. Cabbage seedpod weevil is spreading eastward; Bannerman says these insects’ arrival in Manitoba is imminent, within the next few years, if it is not already present in small numbers. The same goes for pea leaf weevil, now found in Alberta and some parts of Saskatchewan, and spreading in every direction.

Insect overwintering is more of a problem in Ontario, with its comparatively mild winter.

Like their Prairie counterparts, producers will likewise be keeping an eye on the weather to try to stay a step ahead of the breadth of insect pests they encounter – brown marmorated stink bug and spotted wing drosophila, among them.

Dale Cowan, senior agronomist at AGRIS and Wanstead coops, says growers are seeing some increase in western bean cutworm larvae outside of the usual areas. And in the traditional areas of infestation, insect predators such as lady beetles and lacewing larvae are increasing.

He says emerging pests’ numbers can be influenced by storm fronts, temperature and crop growth. He singles out aphid populations as something to watch for and notes that aphids are usually accompanied by various other insects – including their predators such as ladybugs, hoverflies (syrphid flies) and multi-coloured Asian lady beetles.

“When scouting, you should spend as much time looking for predators as for the target insect,” he says. “If there is sufficient predator pressure, you might not have to spray. But the only way you’ll know is by scouting.”