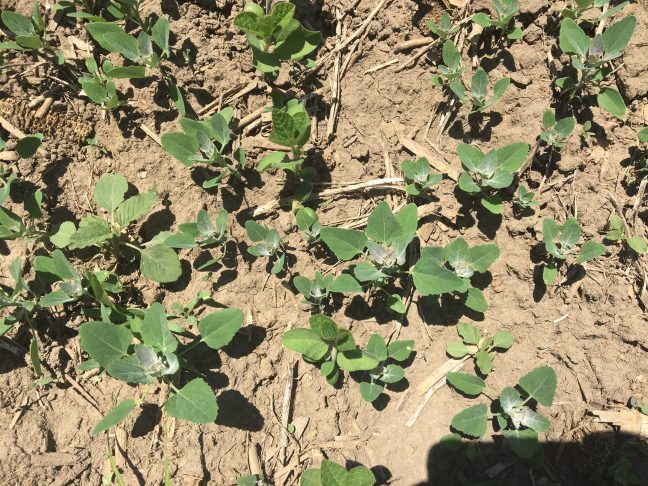 on May 15 | in Tek Talk | by Jodie Deprez | with Comments Off on WHAT’S WORKING ON THE FARM? PRACTICAL SOLUTIONS FOR PROBLEM WEEDS

“Do not be cheap. Weed control is an investment into the current and future crops on every field.” That was parting advice from Norfolk and Oxford County farmer Ann Vermeersch at the 2019 FarmSmart Conference in Guelph. In front of 80 farmers and agronomists, I moderated a session with Vermeersch and Steph Kowalski, a Certified Crop Advisor and Lead Agronomist with the Agronomy Company of Canada. Both shared their thoughts on minimizing the impact of weeds on crop production. Here is a recap of their key points.

2. Make fall weed control a priority. On this point, Vermeersch shares with the audience that they are not afraid to do this job in December provided the target weeds are still green, and they can get a couple of days after application with temperatures above 0°C. Although, you won’t see much benefit that fall. The benefits become obvious next spring, especially with perennial weeds. Although glyphosate is typically used for fall weed control, both Kowalski and Vermeersch like tank-mixing other modes of action, like 2,4-D ester.

This interactive session provided an opportunity for the audience to ask many questions and share their experiences. A comment from this session stood out as an item that needs to be explored more through applied research and farmer innovation; late emerging weeds are a significant challenge. Whether it was eastern black nightshade, pigweed species or crab grass, several producers expressed frustration with species that emerge well past any reasonable window for herbicide control. Although unlikely to affect crop yield in that season, there was a sentiment that it increases weed populations in the following season.

« Pork The World’s Most Consumed Meat, And Other Things You Didn’t Know About Agriculture OMAFRA Vegetable Newsletter – April 16, 2019 »