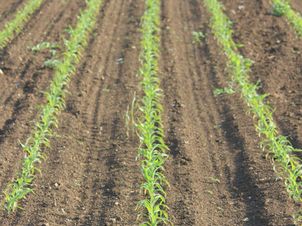 on June 7 | in Ag News | by Jodie Deprez | with Comments Off on STATS CAN FORECASTING MORE CORN AND WHEAT, FEWER OILSEEDS ACRES

Canadian farmers anticipate planting more acres of wheat, corn, dry peas and oats in 2019 compared with 2018 while seeding intentions for canola, soybeans and lentils have declined relative to the previous year.

The Statistics Canada report, released on April 24, notes that planting intentions may have been influenced by ongoing issues, including lower prices for some crops as a result of global supply, tariffs and decreased foreign demand due to ongoing trade issues.

Data on actual seeded area, to be released in June, may differ from current intentions depending on these and other factors, including weather or natural disasters such as flooding.

Given the intention of farmers to plant a greater area of wheat, corn, and dry field peas, there is an expected increase in seeded area for grains, pulse and special crops, while oilseeds are anticipated to decrease given the lower seeded area of canola and soybeans.

Manitoba was the main contributor to the decrease in expected soybean area, with farmers expecting to plant 319,000 fewer acres from the previous year, at 1.6 million acres. This is the second consecutive year that farmers expect to plant fewer soybeans in the province, falling to the smallest area since 2015.

Meanwhile, farmers in Ontario expect seeded area to decline by 3.8% from 2018 to 2.9 million acres.

Nationwide, farmers anticipate planting 3.8 million acres of corn for grain, up 4.6% from 2018.

Canadian farmers intended to plant 25.7 million acres of wheat in 2019, up 3.8% from 2018. Seeding intentions indicate that area allotted to spring wheat will increase by 12.0% to 19.4 million acres compared with the previous year, while durum wheat acreage is expected to decrease 18.8% to 5.0 million acres. The anticipated decline in durum wheat area is the largest since 2010 when seeded area declined by more than 2.5 million acres.

Farmers in Alberta anticipate planting 7.6 million acres of wheat, up 1.7% year over year, while the seeded area of spring wheat is expected to rise 7.9% to 6.8 million acres.

At the national level, farmers expect to seed more acres of barley compared with 2018. A larger expected seeded area in Manitoba, Saskatchewan and Alberta could push total anticipated area up 10.2% to 7.2 million acres in 2019.

Nationally, farmers expect to plant 6.6% fewer acres of canola, to 21.3 million acres in 2019 compared with the previous year. If seeding intentions are realized, this would represent the lowest seeded area of canola since 2016 and 1.6% lower than the five-year average of 21.7 million acres.

Record high year-end stocks for the 2018 calendar year, coupled with concerns regarding limited access to China’s canola market, possibly affected anticipated seeding area. These factors have contributed to lower than average prices, which may have some farmers considering seeding fewer acres of canola or other crops. However, resolution of trade concerns or increased canola prices could alter final seeding decisions.

Canadian farmers expect to plant 9.6% fewer acres of lentils from the previous year, at 3.4 million acres in 2019. The anticipated decline is led by Saskatchewan farmers, who expect a 7.9% decrease in lentil area to 3.1 million acres.

An anticipated decrease in lentil area is likely influenced by ongoing tariffs on Canadian crops from major importers such as India, which has led to high Canadian lentil stocks and lower prices over the past year.