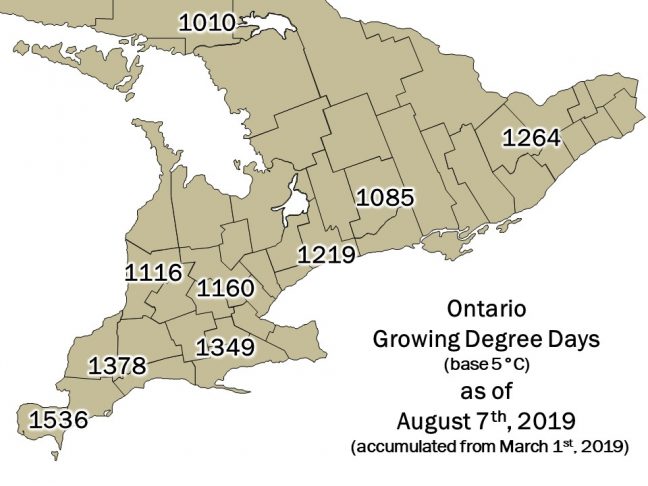 Temperature – A warm week pushed the last of the growing regions above the 1000 degree-day mark accumulated so far this year. Chatham, Essex, and Norfolk regions continue to match their 10 year degree day averages while the remaining regions are still marginally to significantly behind their averages. Harvest is well underway for early and mid-season crops while later season crops continue to make progress.

Rainfall – Rainfall totals were generally low across all growing regions this week. Some regions received small amounts of precipitation, but all areas are well under the quarter mark of their respective 10-year averages for August.

Brassica Crops – Alternaria is active in most regions and head rot in broccoli and cauliflower has been observed. Remember to incorporate all plant material after harvesting a block to reduce the spore load and avoid irrigating in the evening as you want to avoid extended periods of leaf wetness. Not all fungicides labelled for Alternaria on Brassicas are registered on all the crop groups; Table 1 below can be used as a general guideline to determine if a product is registered on a brassica crop group. This season has had a high flea beetles pressure in most areas where Brassicas are grown. Keep an eye open for diamondback moths, cabbageworms, tarnished plant bugs, aphids and thrips. During the hot weather, head brassicas often wilt which could be due to a soil pathogen known as clubroot. Pull suspect plants and observe roots for large clubs. A clubroot survey of Brassica vegetables is underway; please contact Travis Cranmer at 519 835-3382 if you find clubroot in your field and we can conduct a pathotype analysis to determine what resistant cultivars to plant in the future.

Carrot – Canopies are generally closed in most fields. The second generation of Carrot Rust Fly is now active in the Chatham-Kent, Durham, Kemptville, and Norfolk growing regions. Keep an eye out for leaf blights infecting the older leaves at the bottom of the canopy, as well as white mold in fields where the canopy has closed when scouting. Continue to monitor for leafhoppers when scouting as aster yellows has been a problem in some regions.

Celery – Celery leaf curl has been identified in several fields. Avoid walking through the fields when the humidity is high and the leaves are wet as celery leaf curl spores will stick to clothes and equipment. Carrot weevil damage as well as black heart (caused by a calcium deficiency) has also been observed. Keep an eye open for celery late blight / Septoria.

Garlic – Harvest is almost complete. Remember to keep harvested garlic out of direct sun once it is pulled and cure in an area that has good ventilation and low relative humidity. Curing is complete when the cloves are pulled apart and base of the stem close to the basal plate is dry. To learn more about garlic production, we are offering a full day workshop in Guelph on December 4th that will cover every part of garlic production including clean seed, cultivar selection, seeding density, nutrient testing, scape removal, weed control, crop insurance, harvesting, grading, storing as well as scouting/pest management.  To register, call the agriculture contact centre at 1 877-424-1300.

Onions – Bacterial rot has been identified in both transplant and direct seeded fields. The weather has been conducive for Stemphylium development. Stemphylium leaf blight will often start on areas of the leaf where there was a natural wound or herbicide damage. As the spores infect the leaves, the tissue turns tan and pre-mature leaf dieback occurs. Spores of stemphlium will develop on the tan legions and appear elongated along the leaf. The cooler, wet weather has kept the level of thrips low so far this season. Thrips are usually first detected along field borders. Pull the leaves apart and look down into the leaf base for 2mm-long grey adults or very small yellow nymphs ~1mm in length. The spray threshold for onion thrips is one thrips per leaf of plant from an average of 50 plants.

Potatoes – Continue to be vigilant in scouting for late blight, especially in irrigated areas as spores have been confirmed in spore traps found in Norfolk, Simcoe, Dufferin and Lambton counties. Late blight symptoms have been seen in both New York and Wisconsin; Ontario and Michigan have still not had any symptoms on plants yet this season. Early symptoms of late blight include water soaked lesions usually found on the lowest leaves near leaf tips or margins. Later infections will have dark brown or black lesions surrounded by a yellow halo, lesions will eventually coalesce together on both leaves and stems leading to plant collapse. If you suspect late blight in your field, please contact Dennis at dennis.vandyk@ontario.ca, (519) 766-5337