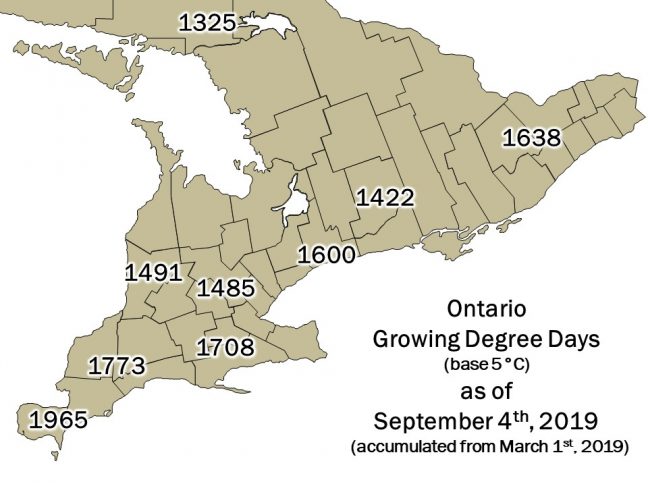 Temperature – Generally cooler weather combined with heavier morning dews and some precipitation has continued to be conducive to the development of plant pathogens in many of the vegetable growing regions in the past week. Continue being vigilant for symptoms of pathogen infection in fields which are not yet harvested, and incorporate remaining plant material into the ground once fields are harvested. Chatham, Essex, Kemptville, Norfolk and Wellington growing regions held steady with their average degree day accumulations, while remaining regions continue to be significantly to marginally behind their average degree day accumulations.

Rainfall – August brought no clear trend in precipitation with Durham and Norfolk counties receiving above average rain for the month, and others ranging from just below average to significantly below. The Essex, Huron, and Sudbury growing regions are well on their way to their September precipitation averages, while the other regions range from no precipitation to about 5 mm in the first few days of the month.

Brassica Crops – Diamondback moths and flea beetles continue to be the most common insect challenge this year. Conditions have been favourable for Alternaria, black rot and fusarium wilt.

Carrot – Risk of disease is the main issue in carrots currently. Be on the lookout for Alternaria and Cercospora leaf blights developing on older leaves as the overnight temperatures cool. Also be sure to check between the rows under the canopy for signs of white mould starting to develop on old and dying leaves.

Celery – Celery harvest is underway. For late plantings, continue to scout for bacterial blight, pink rot and celery leaf curl. Avoid scouting when leaves are wet as pathogens can spread easily on clothes and equipment throughout the field.

Garlic – Planting season is underway in some areas. Early plantings have an increased chance of bolting and winterkill. When purchasing planting stock this fall, send some cloves for bulb and stem nematode testing prior . Even cloves with an intact basal plate and no observable damage may have nematodes. There will be another full day workshop in Guelph on December 4th that will cover every part of garlic production including clean seed, cultivar selection, seeding density, nutrient testing, scape removal, weed control, crop insurance, harvesting, grading, storing as well as scouting/pest management. To register, call the Agriculture Information Contact Centre at 1 877-424-1300.

Onions – Harvest is underway in transplants and some early direct seeded onions. The level of thrips has reached the spray threshold in most areas. Downy mildew was been confirmed in Ontario transplant onions last week; but conditions have not been favourable for sporulation and infection in the major onion growing regions. The weather has been conducive for Stemphylium leaf blight development which has caused significant leaf tip dieback in some areas. Conditions have also been favourable for pink root and onion smut development this year and will impact the yield in many fields come harvest.

Potatoes – The threat of late blight remains front and center as some fields will need a few more weeks of green tops and good weather to fill out. Plants infected with late blight were confirmed in Norfolk county last week but there have been no new reports. The season also seems to bring a late flush of insects as black cutworms have popped up and a small amounts of aphids have been seen in some fields. Continue to scout you fields for signs of disease and insects as the finish line draws nearer.