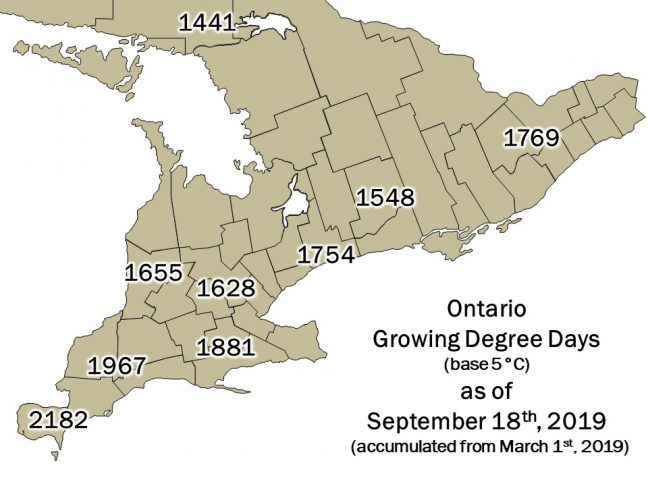 Rainfall – Precipitation continued this week with all region receiving rainfall. Most regions are at, or above the halfway point of their respective precipitation averages. Essex county in particular is quickly approaching its monthly average, and on its way to exceed it should rainfall continue in the region. Continue (when possible) to avoid entering fields which are still wet from precipitation events or morning dew, especially in fields which still have a few more weeks of growing before harvest. This will help to avoid the potential spread of pathogens from plant to plant in the field

Brassica Crops – Fresh market cabbage, broccoli and cauliflower are being harvested. The latest plantings are establishing well and the warm weather forecasted for the next two weeks should allow for some late season growth. Alternaria, flea beetles and diamondback moth were found in high levels this year and flea beetles continue to be a major pest in some fields. Bacterial head rot has also been found to be a problem again this year in both southwestern and eastern Ontario. Brussels Sprouts are maturing and harvest will likely start in early fields over the next few

Garlic – Yields were down over 25% across the province this season and a cloudy spring as well as a winter of flooding and freeze/thaw cycles are being blamed for a decrease in yield. Planting has started across SW Ontario for the 2020 crop. Register for the December 4th garlic workshop by calling the AICC at 1 877 424-1300.

Onions – Harvest is underway in transplants and direct seeded onions. The level of thrips has reached the spray threshold in most areas. Downy mildew was confirmed in Ontario transplant onions a few weeks ago; but conditions have not been favourable for sporulation and infection in the major onion growing regions. Conditions were favourable for pink root and onion smut development this year and will impact the yield in many fields come harvest.

Potatoes – Many fields are being top-killed currently in preparation for harvest. There have been multiple reports of late blight in New York close to the Ontario border so remain vigilant in scouting for late blight. Refer to Publication 838 for fungicides registered to prevent tuber blight.

Peppers – Fresh market growers are continuing to hand harvest. Growers that plan to keep their crop until frost should expected decreased fruit set and size due to the cooler night time temperatures. Some processing peppers have started their bulk, destructive harvest, though most are still hand picking. The pepper weevil survey will be continuing until the end of September. As of Friday, September 13, no pepper weevils have been observed on outdoor traps.

Tomatoes – Harvest is ongoing in both fresh market and processing tomatoes. Processing tomatoes yields looks like they will be average, at least. Fresh market growers planning to keep their crop in until frost should be aware of bacterial diseases, which are affecting both fruit and foliage. Also, growers should be on the look out for late blight as a new report from New York states there is now late blight on tomatoes

« This Thanksgiving, Thank a Farmer Nova Fungicide Label Expanded Via Minor Use Program For Control Of Powdery Mildew On Globe Artichokes And Greenhouse Eggplant In Canada »