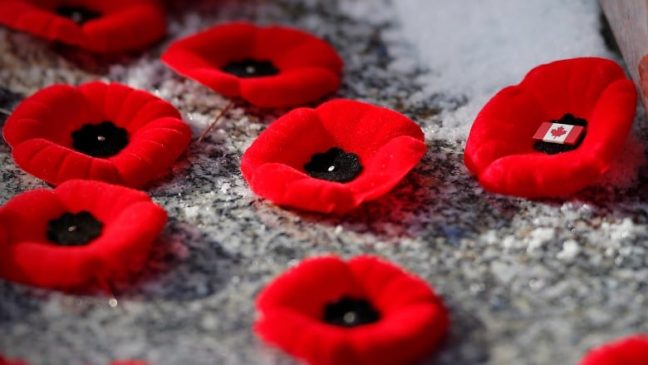 on November 11 | in Kim Cooper | by Jodie Deprez | with Comments Off on Remembrance Day Facts, 11 Important Facts

Remembrance Day is fast approaching, and on this day we acknowledge the courage and sacrifice of those who served their country and acknowledge our responsibility to work for the peace they fought hard to achieve. It is during times of war, individual acts of heroism occur frequently; only a few are ever recorded and receive official recognition.

That is why I have chosen to dedicate my weekly article to all those who served, both oversees and at home, and for our freedom. I am hoping to show my support, appreciation and gratitude towards all of our hero’s who gave so much through the education of what remembrance day means.

Here are 11 important remembrance day facts. These facts can all be found on the Veterans Affairs Canada website, which I would encourage you to visit.

1. Remembrance Day was first observed in 1919 throughout the British Commonwealth. It was originally called “Armistice Day” to commemorate armistice agreement that ended the First World War on Monday, November 11, 1918, at 11 a.m.—on the eleventh hour of the eleventh day of the eleventh month.

2. From 1921 to 1930, Armistice Day was held on the Monday of the week in which November 11 fell. The first Remembrance Day was observed on November 11, 1931, after it was passed as a bill through congress to celebrate it on November 11th each.

3. Every year on November 11, we pause in a moment of silence to honour and remember all who have served, and continue to serve Canada during times of war, conflict and peace. We remember the more than 2,300,000 Canadians who have served throughout our nation’s history and the more than 118,000 who made the ultimate sacrifice.

4. The poppy is the symbol of Remembrance Day. Poppies were a common sight in battlefields during WW1, especially on the Western Front. They flourished in the soil churned up by the fighting and shelling.

5. Remembrance Day is a federal statutory holiday in Canada.

6. The national ceremony is held at the National War Memorial in Ottawa. The Governor General of Canada presides over the ceremony. It is also attended by the Prime Minister, other government officials, representatives of Veterans’ organizations, diplomatic representatives, other dignitaries, Veterans as well as the general public.

7. Before the ceremony, long lines of Veterans, Canadian Armed Forces members, RCMP officers, and cadets march to the memorial lead by a pipe band and a colour guard. At the end of the ceremony, they march away to officially close the ceremony.

9. Many nations that are not members of the Commonwealth also observe Remembrance Day on November 11, including France, Belgium and Poland.

10. The United States used to commemorate Armistice Day on November 11. However, in 1954 they changed the name to Veterans Day.

11. During the Second World War, thousands of Japanese-Canadians were forced to leave their homes and their jobs and sent to live in internment camps. The government claimed it was a matter of national security.

So why do we remember? A quote from Heather Robinson, author of A Terrible Beauty, The Art of Canada at War, answers this question so nicely.

“We must remember. If we do not, the sacrifice of those one hundred thousand Canadian lives will be meaningless. They died for us, for their homes and families and friends, for a collection of traditions they cherished and a future they believed in; they died for Canada. The meaning of their sacrifice rests with our collective national consciousness; our future is their monument.”

In closing, if you really want to show your support and appreciation, aside from wearing a poppy, please visit the Veteran Affairs Canada website and learn more.

Remember that here in Chatham-Kent “We Grow for the World.” Check out our community agriculture website at wegrowfortheworld.com

Anthony Wilson is an Economic Development Officer with the Municipality of Chatham-Kent, and can be reached at anthonyw@chatham-kent.ca