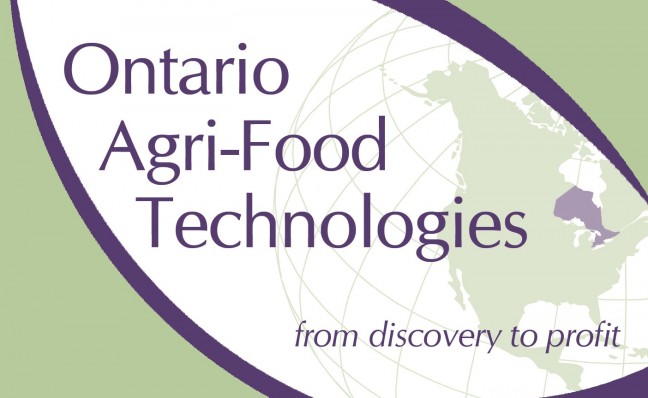 Guelph ON, July 14, 2014 – Dr. Tyler Whale has been hired as the new President of Ontario Agri-Food Technologies (OAFT). He will assume his position on September 2, taking over from retiring President Dr. Gord Surgeoner.

Whale is currently the Industry Liaison Officer with the University of Guelph’s Catalyst Centre, where he is responsible for connecting industry with Guelph faculty for collaborative research projects through the U of G – Ontario Ministry of Agriculture, Food and Rural Affairs (OMAFRA) partnership.

“We are looking forward to having Tyler join OAFT as our new President. He is experienced in the field of commercializing innovation, and his appointment has the unanimous support of the OAFT board,” says OAFT Chair Harold Schooley, an apple and lavender grower from Norfolk County. “As an organization, our mission is to engage agri-food businesses in commercializing new technologies and Tyler’s skillset will be an excellent addition.”

Whale holds an MBA from the University of Saskatchewan and a PhD in immunology and microbiology from the Vaccine and Infectious Disease Organization (VIDO) at the University of Saskatchewan. He has strong ties to Ontario agriculture, growing up on a seventh generation dairy farm in Wellington County. His grandfather, George Jones, was a Crop Science professor at the University of Guelph and widely credited with helping expand Ontario’s corn acreage; and his parents, Bruce and Deborah Whale, are both well known for their involvement with many agricultural and rural organizations.

“Agriculture is contributing to the economy in more diverse ways than ever before. From the developing bioeconomy that produces, for example, sustainable bioplastics, chemicals, medicines and energy, to the traditional and obvious need of increased global food production, agriculture is a key industry in Ontario” says Whale. “I’ve always wanted to work with Gord. I have big shoes to fill, but he is a mentor that I look forward to learning from.”

Whale will be working alongside current OAFT President Gord Surgeoner as part of the transition process. OAFT was established in 1997 and Surgeoner has led the organization since 1999.

“I’m very pleased with the choice the selection committee has made and I’m looking forward to working with Tyler as he takes on this new role,” says Surgeoner.