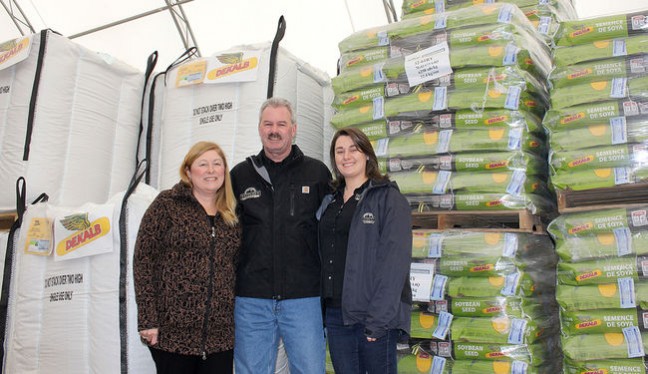 Devolder Farms, based in Dover Township, has been named industry of the year by the Chatham-Kent Chamber of Commerce. Diane and Bob Devolder and their daughter, Lisa, run the day-to-day operations.

DOVER CENTRE – The Devolder family knows that success in agriculture means always looking to the future and being prepared to act.

Bob and Diane Devolder and their daughter, Lisa Devolder, run Devolder Farms, which has grown from a soybean seed business to include building grain storage, drying and handling equipment, and offering a precision agriculture service.

The farm business has been named industry of the year and will be formally recognized by the Chatham-Kent Chamber of Commerce during its 127th annual Business of Excellence Awards event on March 26 in Chatham.

The Devolder family appreciates the recognition.

“It’s kind of nice to know there’s a lot of people in the community supporting us,” said Lisa, who is business manager.

Devolder Farms began in 1988 when the family decided to expand from growing crops to becoming involved in the soybean seed business.

“We wanted access to the newest varieties . . . so we got involved in pedigree seed production,” said Bob.

He said they were able to make connections in the seed industry, which led to where the business is at today, growing the latest soybean varieties and technologies.

Devolder Farms contracts thousands of acres – which is increasing this year – to bring in soybean seed and package it for distribution through the DeKalb seed dealer network.

“We’ve been fortunate to be one of the first in Canada to grow new soybean technologies, such as Roundup Ready soybeans,” Bob said.

He added the business will be rolling out a new Roundup Ready 2 Xtend soybean platform.

But the Devolder family knows you can’t sit still for too long in agriculture.

“The majority of growth has happened within the last five to 10 years,” Lisa said, citing the expansion into building grain handling, storage and drying equipment in 2005.

She said the most recent expansion was about ago year ago when the business got into precision agriculture.

She said precision agriculture has a lot of different aspects to it.

Devolder offers Precision Planting products and services that allows a farmer to fine-tune their planter and assess some of things they do prior to planting seeds so “you’re maximizing the most potential you can get out of the crops that you’re planting,” Lisa said.

Bob added: “As the saying goes, ‘They’re not making any more farm land,’ so we have to get the most out of every acre that we produce.”

As for what’s next for the family farm business, Bob said, “we certainly pride ourselves in looking to the future.”

He added the business is focused on knowing where the new technologies are going and being able to intercept the next technology wave.

But despite the rapidly changing playing field in agriculture, one constant remains for the Devolder family – their love of farming.

“It’s just who we are,” Diane said. “We all grew up in farming all our lives, so to be involved in it the way we are is very satisfying.

“It just feels very comfortable for us,” she added. “I wouldn’t think of doing anything else.”