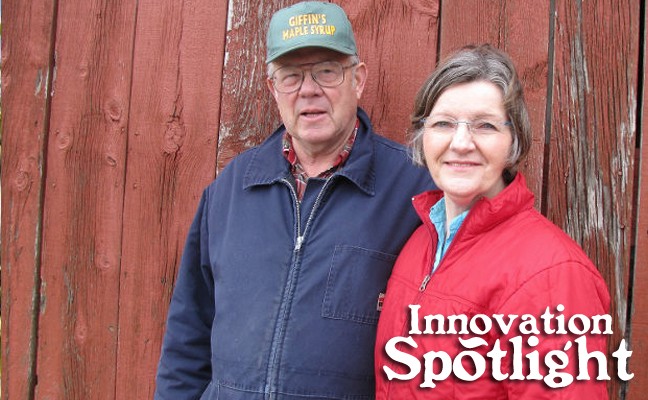 Giffin’s Maple Syrup Products is a family operation owned Don and Jean Giffin.  They began their maple syrup operation in 1980 and have 2800 taps in their 50-acre maple bush. Always open to innovation, in 2015 Giffins started utilizing reverse osmosis for production, which removes 75% of water before any heat is added. They also use a steam boiler to finish, so the syrup will not burn.

Jean authored the “Simply Maple Cookbook” for the province, which is a collection of 280 maple syrup recipes. A very popular cookbook, it is continually in print since 1995.

The Giffin’s have received a number of awards, including the 1997-98 World Champions in Maple Syrup; the 1999 Charles P. Corbet Trophy for the highest score in maple sugar classes; and the 2000 Maple Syrup Award from the Premier of Ontario.  Along with maple syrup production, the Giffin’s also grow cash crops, and in 2013 the Ontario Seeds Growers awarded them highest yield in soybeans for all of Ontario.

Don is a Board Member for the Royal Agricultural Winter Fair and a Judge for maple syrup and sugar.