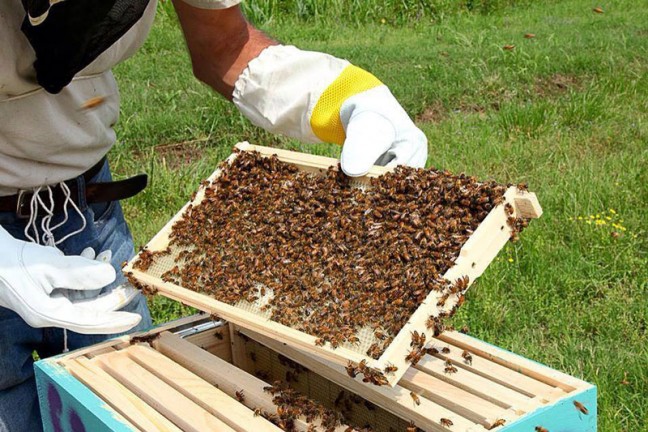 The 2014 field season was a mix of challenges and opportunities for beekeepers in Ontario. Winter loss reported in the spring of 2014 (58 percent) was the highest loss reported to date. As a result of these high winter losses, many operations focussed on rebuilding colony numbers this season. In 2014, Ontario bee colonies (30,800 colonies) left the province for pollination services in greater numbers than in previous years. Additionally, beekeepers reported in-season bee mortality incidents within the active bee season. Ontario addressed these in-season incidents by increased inspections and the collection of samples for laboratory analysis (pesticide residues, honey bee pathogens, etc.). Although varroa mite infestation remains an issue facing beekeepers, field data suggests that commercial beekeeping operations were able to maintain effective management of this threat to bee health during the 2014 season.

Although some areas of Ontario saw a reduction in yield, honey production during the 2014 season averaged 72.62 lbs / colony which is increased compared to the 2013 season (65.26 lbs / colony). The spring of 2014 was cool, rainy and arrived late in many parts of Ontario which in addition to other factors, may have contributed to the localized reduction in honey yield. Delays or failure of honey bee colonies to build up to strength was reported anecdotally by some beekeepers which limited their ability to harvest available nectar resources. However, higher temperatures in late summer and early fall contributed to a substantial late fall nectar flow which increased the honey yield for many beekeepers.

The demand for pollination services for berry crops in Eastern Canada has increased in recent years. Since 2010, the number of Ontario colonies used for pollination in other provinces has increased by more than doubled (an increase of 18,200 colonies; Table 1). In 2014, nearly one third of the managed Ontario honey bee colonies left the province to pollinate blueberries, cranberries and canola in the provinces of Quebec, New Brunswick and Nova Scotia and Prince Edward Island. Eastern Canada and Northern Ontario are planning to increase the blueberry acreage within the next decade which will further increase the demand for pollination services up to an additional 100,000 honey bee colonies. The proposed expansion of the blueberry industry may provide additional opportunities for the beekeeping industry to expand and diversify.