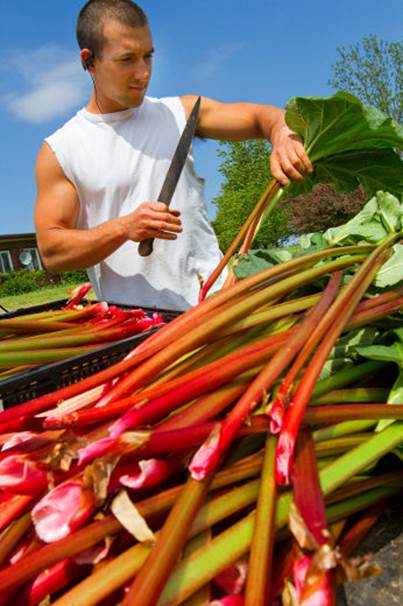 » Kim Cooper » Rhubarb Was Used As a Prescription...

Rhubarb. The very thought of it puckers many mouths. But rhubarb has quite the story. Packed with high nutrition at a low cost, this crop is spring’s unsung hero. Rhubarb contains calcium for bone health and potassium for proper organ function.

Rhubarb thrives in areas of direct sunlight and can successfully be planted in containers if they are large enough to accommodate a season’s growth. Rhubarb damaged by severe cold should not be eaten, as it may be high in oxalic acid, which migrates from the leaves and can cause illness. In traditional Chinese medicine, rhubarb is one of the most widely used herbs, and the rhubarb roots have been used as a laxative for thousands of years. Rhubarb also appears in medieval Arabic and European prescriptions. It was one of the first Chinese medicines to be imported to the West from China. The primary result of rhubarb root as a herbal medicine is a positive and balancing effect upon the digestive system. Rhubarb leaves contain poisonous substances, including oxalic acid, which is a nephrotoxic and corrosive acid is present in many plants. Humans have been poisoned after ingesting the leaves. Such poisoning was a particular problem in the First World War when the leaves were recommended as a food source in Britain.

Rhubarb is 95% water and contains a fair source of potassium, contributes minor amounts of vitamins, and is low in sodium. Rhubarb’s crisp sour stalks are rich in vitamin C, dietary fibre and calcium, although the calcium is combined with oxalic acid and so is not easily absorbed by the body. Rhubarb is somewhat acidic (pH 3.1-3.2) but in most recipes this is normally offset by sugar. One cup of diced rhubarb contains about 26 calories.

Rhubarb has other uses which are not so well known. You can use rhubarb to clean your pots and pans. If your pots and pans are burnt, an application of rhubarb over the affected area will bring back the shine.

Rhubarb is also used for hair colouring, as it contains a fairly strong dye that can create a more golden hair colour for persons whose hair is blond or light brown. Simmer three tablespoons of rhubarb root in two cups of water for 15 minutes, set aside overnight, and strain. Test on a few hair strands to determine the effect, and then pour it through the hair for a rinse.

Rhubarb leaves can also be used to make an effective organic insecticide for any of the leaf-eating insects such as cabbage caterpillars, aphids, peach and cherry slug, and others.

So there you have it. All you wanted to know about rhubarb. Another great food product grown right here in Chatham-Kent.

June 1-7 is Local Food Week across all of Ontario, so here in Chatham-Kent, let’s celebrate our delicious and nutritious local food and our amazing local food producers. Thank you for supporting local food.

Think about this – Plan ahead – It wasn’t raining when Noah built the ark.