» Ag News » Is The Nitrogen Still There?

After heavy rains and wet soil conditions, questions come up about nitrogen. Is it still there? Should I add more?

Here comes the stock answer – It depends… Yes that seems to be a cop out but for good reason. There are a number of factors that come in to play here. Let’s take a closer look and then make some estimates.

The amount of nitrogen lost depends upon the amount that was in the nitrate form. Ammonium is held by the cation exchange complex and not lost. The conversion of ammonium to nitrate (a microbial process) is interrupted when the soil is saturated. Nitrate however can be lost through leaching and denitrification.

Nitrate leaching is the downward movement of nitrate ions. Nitrate is a soluble anion that is not held or retained by the soil. As more rainwater enters the soil it displaces water already in the soil downward, carrying any associated ions like nitrate. So how far has the nitrate leached? Work from the Cornbelt suggests that on silt loam or silty clay loam soils, an inch of water entering the soil (this is not an inch of rain since only a portion of the rain will soak in, especially when the soil is already wet) will only move nitrate down about 6 inches, due to the high water holding capacity of these soils. However, on a sandy soil an inch of water can move down a foot. Deeper rooted crops like tomatoes and corn have the ability to recapture this nitrate if growing conditions in the next month are good.

Of perhaps more concern is denitrification, if soils stay wet and are slow drying. Denitrification refers to the microbial process where a group of soil bacteria (facultative anaerobes) use nitrate as an oxygen source when the soil is saturated and has low levels of oxygen. When oxygen is taken from the nitrate in soil, nitrogen gas or/and nitrous oxide is produced and released to the atmosphere. The rate of denitrification is influenced by temperature, soil pH, energy sources (carbon etc) etc. There has been some research done to quantify the amount of denitrification that can happen, however the work was done primarily again in the Cornbelt so it is a very rough guide. Keep in mind that this refers to clay loam and silt loam soils that are saturated. 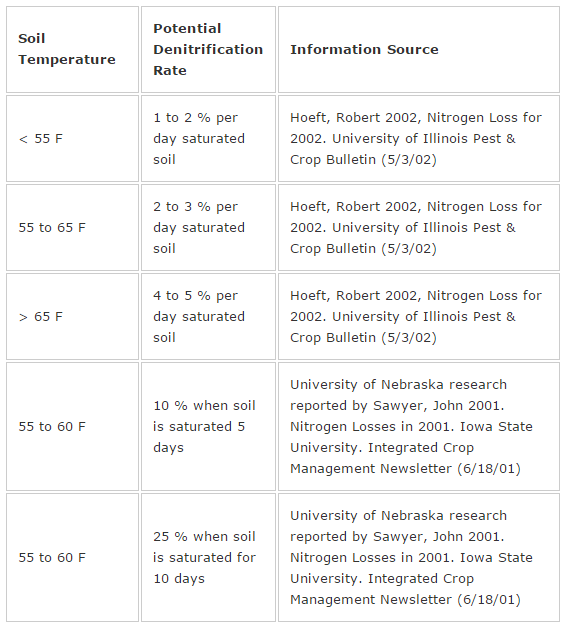 The lighter soils usually drain reasonably well but many of the heavy soils may continue to be wet. If denitrification is a concern, consider carefully the crop condition, field topography, amount and type of fertilizer applied and the rainfall pattern before deciding to add more nitrogen. The very nature of flooding or ponding is spatial in its variability. A number of years ago, sampling was done in Essex and Kent counties to track the nitrogen losses from heavy rainfall and water ponding in late June. The nitrate analysis suggested that there was very little impact or loss of nitrogen from the study areas. The ponded areas tended to have higher organic matter from years of erosion and were able to release more nitrogen. The key in that case was removing the excess water and getting oxygen back into the soil to reduce root damage.