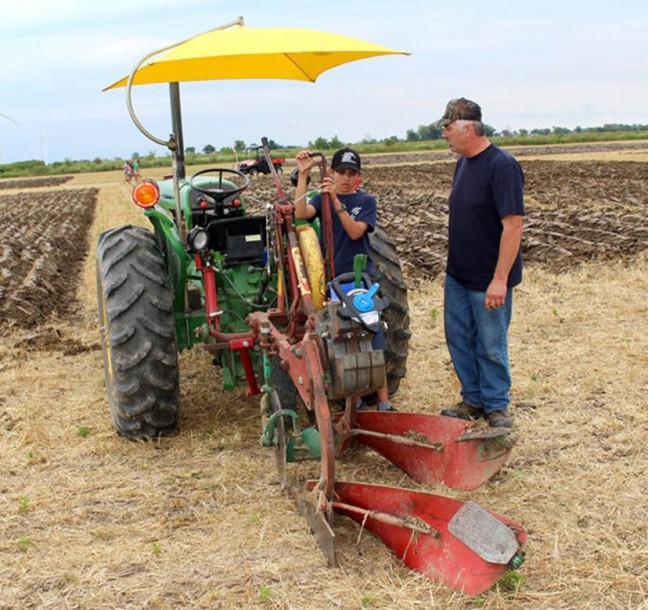 Sterling has an effective way to keep his three sons on the straight and narrow – get them involved in plowing matches.

The Sterling boys were action on Saturday all participating in the 79th annual Chatham-Kent Plowing Match, held Saturday at the Charing Cross-area farm of Chris and Sherry Brady.

“All three boys are plowing and they’re having a good time, and they’re learning at the same time,” Sterling said, adding they’ve had some good coaches over the years.

The Sterling boys got involved in plowing through their 4-H plowing club.

“We started in that from a young age and from there we have continued and improved quite significantly, and here we are,” Brian Sterling said.

When asked how long he had been watching his older brothers take part in plowing competitions, Matthew laughed: “Since I didn’t know what this was.”

Although he only has three experience, the youngest Sterling competitor has already learned the value of patience when it comes to plowing competitions.

“It’s not about speed, but precision, and I like that,” Matthew said.

He also gained some wisdom about plowing, noting you will mess up sometimes, but that should encourage you to find a way to improve.

However, when it comes to asking the secret to being able to plow well – maintaining straight lines and turning over as much ground as possible – there are plenty of different answers.

“It really is just adjusting the plow and not being afraid to hop off it and turn some pieces and make some adjustments, and get it just right,” Rob Sterling said.

“Every field that we come to, the land conditions are different,” he said.

“The dirt is always different to turn over.

“It’s always a learning experience,” he added. “You can ask the guys in the antique class that have been doing this for 50 years, and they will say the same thing – it’s new every time to them.”

Matthew said it depends on the plow and the tractor.

With all the technology in agriculture, the Sterlings were asked if a well plowed field is still important.

“It depends who you ask,” Rob Sterling said, noting some farmers don’t plow at all, others still plow their fields every years, and others only do it every few years.

“I still think there’s value in doing it,” he said.

Brian Sterling said the value of plowing depends on the land and the soil you are dealing with, and what the farmer prefers.

“There really isn’t a right or wrong way, just depends on how it works for you,” he said.

He noted with the changes coming surrounding the use of neonicotinoids – a seed-treated insecticide – “we might have to get back to some more tillage here to control these bugs in the ground.”

The Sterlings enjoy the local plowing match, but Carl and Rob are also taking a lead role in planning the 2018 International Plowing Match and Rural Expo being held in Chatham-Kent.

“It’s exciting and it’s a way of showcasing our community,” he said.