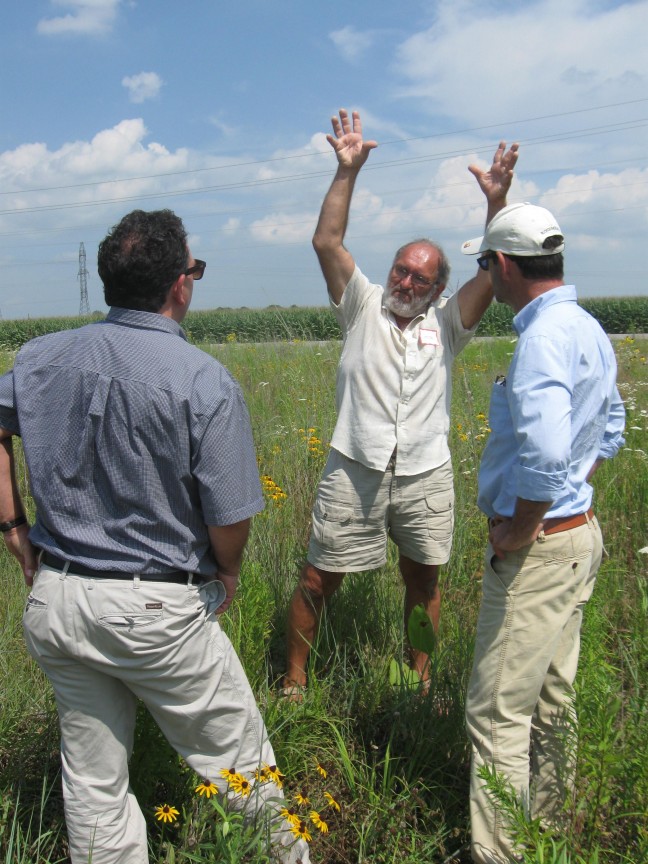 Not only was Chatham-Kent awarded a prestigious 5 Bloom rating within this year’s Very Large Category in the International Communities in Bloom (CiB) competition, but it has also won Canada’s Most Pollinator-Friendly Community Award.

International CiB judges, Richard Daigneault (left) and Alain Cappelle (right) are captivated by Sydenham Field Naturalist Larry Cornelis as he describes some of the tall grass prairie species that have been reintroduced at Peers Wetland outside Wallaceburg. It was a perfect example of one of CK’s many pollinator friendly initiatives and most certainly contributed to being named Canada’s “Most Pollinator-Friendly Community” at the National CiB Ceremonies held in Kamloops, BC on October 3.

International CiB judges Alain Cappelle and Richard Daigneault were impressed overall during their July visit to Chatham-Kent awarding the Municipality with the highest number of blooms possible for the 3rd year in a row. Awards and bloom ratings for the elite international competition were announced at the CiB Symposium and Awards Ceremonies held in Kamloops, BC on October 3.

As they made their way across the community Cappelle from Belgium, who had judged CK in 2013, regularly remarked on the substantial improvements that have been made. Both gentlemen were particularly impressed “with the natural restoration of wetlands and tall grass prairie, and new projects for windbreaks, buffer strips and tree plantings.” They gave CK a special mention for Return The Landscape – Prairie Restoration Project.

“It was such a pleasure to witness the true appreciation the judges had for what we have been able to accomplish throughout Chatham-Kent,” said Communities in Bloom coordinator Monica Robertson. “If everyone would take the time to see our quaint downtown awesome parks and landscapes, environmental initiatives, and heritage assets through the fresh eyes of an outsider CK’s community pride would be through the roof.”

Chatham-Kent’s year round accomplishments are annually recorded in a CK CiB Community Profile Book. This document assists the judges with their evaluation of a community on items that they may not have had opportunity to see during their visit.

To view this book on-line or for more information, visit Chatham-Kent Communities in Bloom or call 519.360.1998.