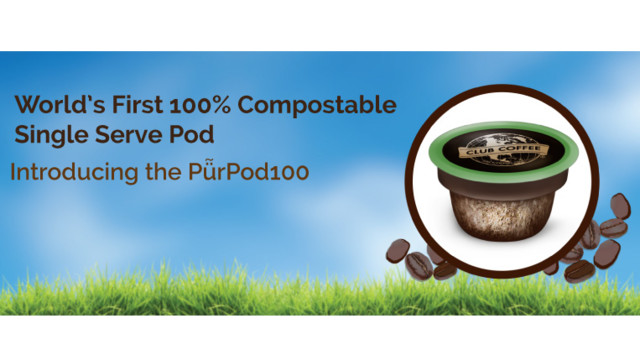 Ed. Note-We add this because of our dislike of the incredible waste created by the coffee pod trend

Toronto’s Club Coffee says it is close to releasing a coffee pod that is 100 per cent compostable, meaning the whole pod can go into the municipal green bin.

Years in development, the product has earned certification from the Biodegradable Products Institute, a New York-based institute which certifies products are compostable based on rigorous testing.

As consumers expressed concern about the amount of waste generated by the trend toward coffee pods, some makers have released recyclable pods which require the consumer to scoop out the coffee, remove the lid and plastic ring and then rinse out the container for recycling.

“Today, virtually all of those go to landfill when when they’re finished with. We did some research that said consumers are feeling very guilty about this,” he told CBC News.

But the Club Coffee biodegradable product is made of newly created bioresins, developed in concert with the Guelph, Ont.-based Bioproducts Discovery and Development Centre (BDDC).

The entire pod can be thrown in the green bin and will completely break down in an industrial composting facility, meeting the test for BPI certification, according to company spokeswoman Lauren Joakim.

There is no official test for whether it will compost in a backyard composter, she said.

Before the pods get a retail release, Toronto-based Club Coffee has to get the approval of municipal composting programs to ensure it meets their requirements.

Joakim said she expected that would happen in some cities later this year and in spring 2016 across Canada.

That process is proving to be difficult in some cities, Joakim said.

“Toronto is saying they don’t want to touch it,” she said. “With so many of these pods out there, they’re afraid of other pods that aren’t biodegradable going into the green bin and contaminating it.”

Most cities do their own testing before they approve products as compostable and the BPI certification has helped Club Coffee get a hearing in most jurisdictions.

Pigott said Club Coffee is working on tests of the pods in a backyard composter, for the 40 per cent of Canadians who do not have access to a municipal green bin program. The company is also committed to working with municipalities until it gets acceptance of the pods for green bin collection.

“This is a solution that consumers want,” he said. “Canadians are well-trained in separating waste streams.

“Consumers want to do the right thing,” he added.

The PurPod100 biodegradable pods are compatible with Keurig machines, though Keurig itself has tried to discourage consumers from using pods from competing companies.

However, having the first compostable pod could put Club Coffee ahead of competitors in winning over shoppers concerned about waste.

Claudio Gemmiti, vice-president of innovation at the company, said two University of Guelph professors helped put the company ahead of its competitors in developing a compostable pod.

An academic-industry partnership at BDDC helped in creation of a ring around the pod made from bioresin that incorporates the chaff from roasted coffee beans. The filter and lid are also made of 90 per cent plant-based materials, he said.

The PurPod100 has been designed to look different from other coffee pods, so it cannot be confused with non-compostable products, he said.