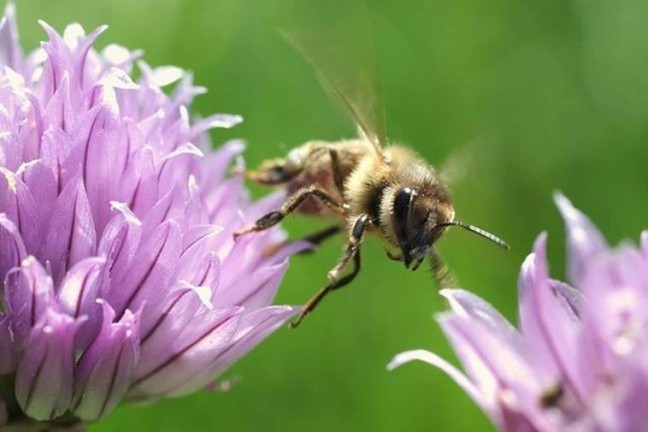 I don’t think I have met anyone who doesn’t like honey. Ontario’s honey is produced yearly from July to September and can be purchased directly from Ontario beekeepers at roadside stands in the summer and stores, or the Internet throughout the year.

Ontario honey is sold by weight and comes in various forms.

Liquid honey is extracted from the comb and strained for clarity. All liquid honey will naturally granulate and may be used in that state or be re-liquefied by placing the container in warm water until all crystals are gone.

Comb honey is as it comes “packaged by the bees” still in the original beeswax combs. The comb and honey can be chewed together and the comb can be swallowed. Chunk honey is honey combs packed in wide-mouth containers filled with golden liquid honey.

Pasteurized honey has been heat-treated to destroy yeasts which can cause honey to ferment. Pasteurized honey tends not to crystallize because the heat treatment melts dextrose crystals that can promote granulation.

Liquid and creamed honey are graded according to quality. Grades are based on clarity, colour and on standards of moisture content. The grade that consumers should look for is No. 1, which has low moisture content, and therefore, excellent keeping qualities.

Ontario honey comes in various colours and flavours. The colour and flavour of a batch of honey will depend on what flowers were available to the bees at the time when they were gathering the nectar.

Honey made from only one flower source has a distinctive flavour and colour. Beekeepers often keep beehives where the bees have access to only one type of flower in order for the bees to create these wonderfully flavoured honeys. Some examples of Ontario flower honeys are clover, alfalfa buckwheat, basswood, golden rod and summer flowers.

White honey is gathered from clovers, basswood and canola.

Golden honey, with its own distinctive flavour, comes from goldenrod and other flowers.

Amber (or dark) honey, which is the strongest flavour, is primarily gathered from the buckwheat flower.

Honey is produced when the sweet honeydew (from trees) or nectar (from flowers) is gathered by the bees, stored and matured in the hive, and processed carefully by our beekeepers.

Honey is a healthy naturally thick fluid, consisting of 17 per cent water and contains traces of maltose, sucrose, vitamins, minerals, organic acids, and enzymes. As honey’s sugars are mainly fruit sugar and glucose, it is quickly absorbed into the bloodstream.

We have a number of local beekeepers who produce excellent quality honey products. If you are buying honey, try and purchase locally produced products, which is good for you and great for our local economy.

Think about this – With God, there is hope even in the most hopeless situation.