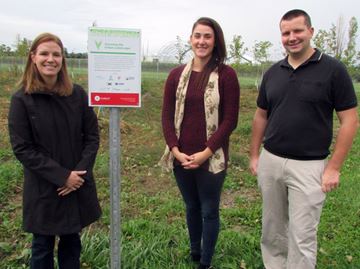 Scientists at Vineland Research and Innovation Centre have been studying urban trees and what best practices can be implemented to ensure their success. From left: Darby McGrath, Erin Agro and Jason Henry.

Facing the abnormal conditions of wind speeds and road salt, for trees to survive along Ontario’s highways they have to be tough.

But scientists at Vineland Research and Innovation Centre say it’s about more than just the tree. A study that dates back to 2008 is discovering what makes an urban tree successful.

McGrath, who came aboard in 2013, said studies of 11 sites – mostly in southwestern Ontario – is showing that soil health is extremely important in deciding whether or not an urban tree will be successful.

“What trumps everything is what’s happening in the soil,” she said.

Originally focusing on Ontario’s highways, the study has expanded to include all urban trees, which can refer to trees planted on arterial roads, and even in backyards and commercial districts. Basically, the study is looking at any unmaintained lands where there’s limited after-planting care.

One of the biggest issues trees face, especially along highways, is soil compaction. Highways require highly compacted soil to keep the roads in good shape, and they also face incidental compaction from the heavy equipment that’s used. But in order for trees to be successful, loose soil with plenty of organics is needed.

But it all comes back to the soil and finding ways to “bring life back to the soil,” McGrath said. The researchers have been utilizing municipal compost and biosolids to increase organic content at the test sites.

The results have been encouraging. McGrath said the trees on the test sites are showing strong growth, a sign they’re adapting well and not just struggling to hang on. They’ll continue to monitor the trees at least until the trial ends in March 2018.

McGrath and her team are also developing a database based on the study. The database will help guide agencies such as municipal governments and the Ministry of Transportation when they’re planting urban trees. It could also be something for anyone to use, she added.

“Hopefully it becomes a tool that anyone can use,” she said.

While current research has mostly been for southwestern Ontario, there’s also a study in Alberta and another test site in Trenton. McGrath said she’d like to see it expanded to incorporate the unique soil and environmental conditions throughout the province.

“We’re finding the balance between making sure the plantings do well and meeting the public demand for green space,” she said.

Most of their findings have been more or less what the team expected, however there was one surprise. McGrath said the literature recommends a lot of organics, as much as 50-per-cent compost.