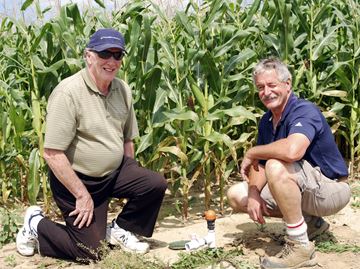 John O’Sullivan, left, and Peter White crouch near an irrigation pipe in a cornfield at the agricultural research station near Simcoe. The researchers are trying to adapt subsurface irrigation for use in Ontario.

They bury drip tape 14 inches into the sandy soils of Norfolk County, slowly releasing water and nutrients into the root zone in fields of corn.

Water flows through pipes from an irrigation pond, the system automated, applying the right amount of nutrients exactly where they’re needed.

A farmer could be miles away, monitoring the system from a computer or a cellphone. It could be sweltering hot, the middle of a wretched drought.

The crop would still get the moisture it needs.

This is subsurface drip irrigation, an innovative system used in the United States that’s being adapted for use in Ontario at the agricultural research station near Simcoe.

“Agriculture uses a lot of water, and particularly crop irrigation,” said John O’Sullivan, a retired University of Guelph professor and project manager for the research.

“So there’s this effort to make it more efficient …. Traditionally irrigation was very labour-intensive. You know, you go back where they laid pipes in the ground and overhead sprinklers.

“And more recently they’ve got these rain guns, but they’re still certainly energy-intensive, and they’re not efficient. Only about 50 per cent of the water actually reaches its target.”

Subsurface drip irrigation is seen as a better way forward, in part because it uses less water and gets it directly to the root zone. There’s no evaporation of water from the surface.

And rather than throwing fertilizer on the field at the start of the growing season, farmers can gradually release nutrients as needed, in a process called fertigation.

“Essentially what we’re doing is spoon-feeding the crop,” O’Sullivan said.

“Another way it’s environmentally friendly (is) that you’re not putting nutrients out there that the crop can’t use right now,” added Peter White, an irrigation technician with the university.

“Sometimes a corn farmer will have to put on a fairly large amount of nitrogen. Well, if you happen to have a leaching rain shortly after you do that, not only have you lost your fertilizer but you’re catering to pollution of groundwater.”

Subsurface drip irrigation can be applied to other industries, O’Sullivan said. “Anywhere there is a high use of irrigation.”

Six area farmers are already using the system, the majority of them in Norfolk County. And it’s believed higher yields are a given if the system is implemented widely in sandy soil areas.

“It takes the risk out of that kind of farming – you know, growing corn in a sandy soil,” O’Sullivan said. “You can’t afford to have a year where you’ve got no crop, right?”

It costs between $1,500 and $2,000 to install a subsurface drip system, but researchers tout the energy savings of a subsurface system they say lasts 25 years.

“We’re putting water into the ground at 12 psi (pounds per square inch), whereas if a farmer’s using a regular travelling gun overhead system, he’s probably over 100 psi,” White said. “So just in the water pressure alone there’s an enormous energy saving.”

A consortium of growers associations is funding the research, along with the University of Guelph’s Gryphon’s Leading to Accelerated Adoption of Innovative Research (LAAIR) program.

“What we think is, if there’s another drought, let’s say like 2012, that the utilization of the system will really pick up as people get to use it and see the benefit of it,” O’Sullivan said.

Researchers are still learning as they go, trying among other things to determine how far apart the drip tape should be spaced in the field.

“These growers that have gone ahead and put the systems in are, all to a man, very progressive growers,” White said.

“They’ve all wanted to put some of this system in because they see a need for it in the future. They’ve gone through droughty periods in the past, and they want to be prepared for the future.

“So they’re all looking forward with these systems and they’re all keen on learning how to use them, as we are, too.”