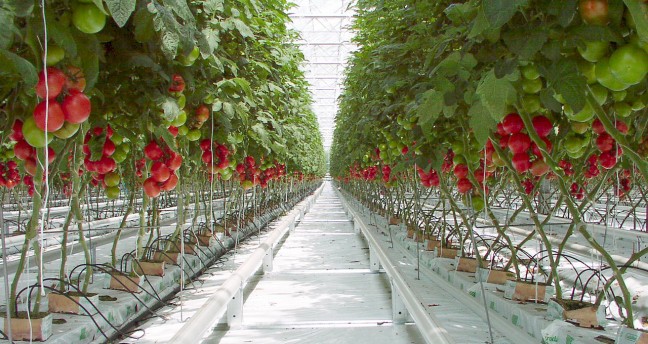 Ontario’s greenhouse vegetable growers are experimenting with new lighting systems in hopes of being able to harvest locally grown vegetables year round.

There isn’t enough natural sunlight in southern Ontario during the fall and winter months to take a greenhouse pepper crop through to harvest.

And so far, the results have been encouraging, with plants responding well to supplemental light levels of 200 micromoles (number of particles of light) per square meter. Their current yield is already equal to that of a crop grown during the normal growing season, and is expected to increase over time.

“The supplemental light enables the plant to grow, thrive and set fruit year round. Without it, plants won’t grow as well and won’t produce as much fruit due to the short daylight hours in fall and winter. This opens new possibilities,” explains Peter Quiring, Owner and President of NatureFresh™ Farms in Leamington, where the light trials are taking place.

The company grows sweet bell peppers on 130 acres under glass in Leamington and recently completed a 15-acre construction in Ohio, with an additional 30 acres expected to be completed by late 2016. Their crop is normally planted in January with harvest running from April through to December; it takes 13 weeks from planting until a sweet bell pepper plant bears its first ripe fruit.

“With supplemental lighting, we can put plants in the greenhouse in September and start harvesting in January for a continuous harvest,” says Quiring, adding that Ontario’s greenhouse pepper harvest overlaps with harvests in Mexico and the Caribbean in the fall and spring shoulder months. “People would rather buy Canadian and this would also greatly reduce food miles as we’re only within a one day drive from most markets on the East Coast.”

The OFIP funding was an important component of the project because it means that research can be done collectively on behalf of the entire industry instead of every grower having to tackle the problem on their own, which is cost prohibitive.

And partnering with a commercial greenhouse operation lets the technology be piloted on a large scale, which is often not possible in smaller research facilities.

“This work is groundbreaking. We are the only lighted pepper trial in North America that I know of, and based on work we’ve done and trials in Europe, year-round harvest is the future. Although the cost of this technology is still quite high, we have to produce more with less,” believes Quiring. “We need to continue to be on the cutting edge so we can increase our yields, our food safety and our overall efficiency.”

The Ontario Farm Innovation Program is funded through Growing Forward 2 (GF2), a federal-provincial-territorial initiative. The Agricultural Adaptation Council assists in the delivery of GF2 in Ontario,