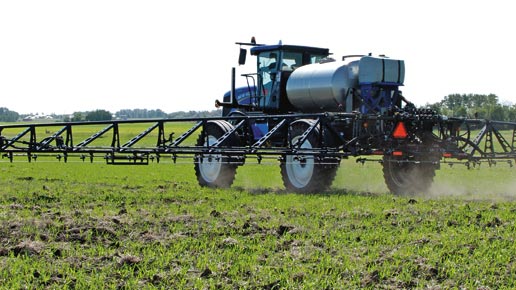 In order to understand and use fungicide resistance management strategies effectively, first learn how and why fungicide resistance may develop. This is the third in a series of articles by Dr. Andy Wyenandt, Rutgers Agricultural Research and Extension Center. Originally published in the Rutgers University Co-operative Extension Plant and Pest Advisory. Note that some fungicides mentioned here may not be registered in Canada. Always consult the label for your location before using any crop protectants.

Although highly effective, fungicide chemistries like those in FRAC code 11, with a very specific MOA, are susceptible to fungicide resistance development by some fungi. Why is that? In the strobilurin’s, a single nucleotide polymorphism of the cytochrome b gene leads to an amino acid substitution of glycine with alanine at position 143 of the cytochrome b protein.

For us, knowing the specifics on the technical jargon isn’t so important, its understanding what is at stake. So, if we hear someone speak about G143A resistance development to the QoI fungicides (where resistance is already known in cucurbit Powdery mildew and Downy mildew), we know what they are talking about and how important it is! So much so, if cucurbit powdery mildew develops resistance to one strobilurin compound it may develop what is known as cross resistance and become resistant to all chemistries in FRAC code 11, even if only one chemistry has been used!

How do we avoid the chances for fungicide resistance like this to develop? It’s simple, don’t let the fungus ‘figure out’ what it is being sprayed with and do this by rotating different fungicide chemistries (i.e., FRAC codes). Proper fungicides rotations are necessary when fungicides with specific MOA’s are used in fungicide programs for controlling important diseases. That’s why it is important to follow a fungicides label precisely and be certain that some fungicide chemistries aren’t overused.

All strobilurin fungicides should be tank mixed with a protectant fungicide, when possible. Remember tank-mixing high-risk fungicides (i.e., FRAC code 11) with low-risk, protectant fungicides (FRAC codes M1-M9) helps reduce (and/or delay) the chances for fungicide resistance development. Never tank mix strobilurins together and never apply any strobilurin fungicide (either the same chemistry or different chemistry) in consecutive applications if stated by the label. Remember, azoxystrobin acts against the fungus the same way as trifloxystrobin does and so on. Even though you are spraying two different fungicides, each has the similar MOA and is acting against the fungus in the same exact way.