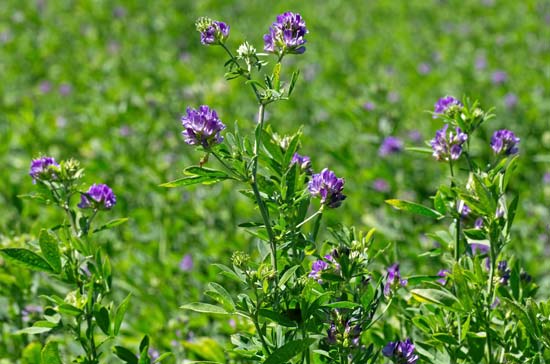 Over the past few decades genetically modified (GM) seeds have become a major part of the farming industry. These seeds have helped to produce higher yields and better plant health. Although the benefits of GM seeds are great, there is still call to use discernment when assessing their value in certain crops.

In the past few months there has been much discussion in regards to Round-Up Ready alfalfa and concerns have been raised about the risk of seed containing the Round-Up Ready trait contaminating pure non-GM seed. Most GM crops are annuals, dying out at the end of the growing season. Because alfalfa is a perennial that is mostly pollinated by bees and other insects, it has a high likelihood of spreading and of being cross-pollinated. As a result, it would not take long for fields with GM alfalfa to integrate with fields planted with non-GM seeds. This then becomes a problem for organic farmers along with any farmer who wishes to maintain GMO free crops.

Not only can alfalfa be cross-pollinated, but as a particularly virulent crop it has the tendency of populating areas beyond where it has been planted. This can be a result of the wind carrying the fine seed into ditch banks, neighbouring yards and beyond, or from the natural expansion the plant makes using its extensive root system. Because of this uncontrollable wide broadcast of seed and the general tenacious tendencies of alfalfa plants, it would be nearly impossible to attempt to control the spread of GM alfalfa.

It is prudent when considering the use of GMOs to look at their benefits as well as their shortcomings. Unfortunately, when considering the case for Round-Up Ready alfalfa, the benefits are few. Because alfalfa is most often planted with a mix of grasses and clovers that are not Round-Up Ready, even by using GM alfalfa most farmers will still not be able to use the Round-Up spray. Alfalfa is used as a forage crop for livestock and as a cover crop to help improve soils, so it is used in many different sectors of agriculture.

As a result it has become clear to us at the CFFO that the toll Round-Up Ready alfalfa would take on the farming industry would far outweigh the benefits that some may receive by using this seed. We have therefore, petitioned our government to ban the use of GM alfalfa for the time being until suitable means can be provided to protect farmers from any unintentional spread.

« Have Your Say On Northern Agri-Food! Benefit More With The 2016 Species At Risk Farm Incentive Program »