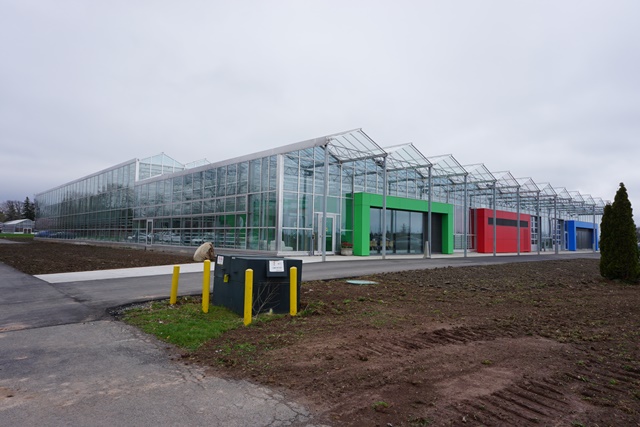 The largest, most modern pre-commercial horticultural research greenhouse in North America is making its official debut on June 3.

As part of the grand opening of the 40,000 square foot facility at the Vineland Research and Innovation Centre (Vineland), the public is invited for a tour of the greenhouse.

The older greenhouse facility on the Vineland campus no longer met requirements for research purposes and was costly to maintain, whereas the new complex, which sits on approximately one acre, is efficient and built to the latest commercial scale standards.

According to Vineland CEO Jim Brandle, it’s a flagship that is emblematic of the rebirth of Vineland, the former government research station that began its transformation into a world-class horticultural research hub in 2007.

In addition to helping advance greenhouse horticulture through breeding, improved plant performance, pest and disease management, the new facility will also function as a testing ground for the development of robotics and automation, technologies vital to the future of the greenhouse industry.

The greenhouse became fully operational last fall and the first tomato research crop was planted inside in December 2015. The total cost of the greenhouse construction from initial planning and design through to commissioning was $10.4 million, with Baird Sampson Neuert appointed as the architectural firm and TR Hinan serving as general contractor.

Officially dubbed the Collaborative Greenhouse Technology Centre, it creates a space that will bring companies, industry and researchers together to encourage collaboration and drive economic growth by bridging the gap between innovation and commercialization.

Some of the greenhouse’s unique features include:

The greenhouse production environment is tightly controlled allowing mitigation of weather, climate, pest and disease issues and resulting in crops that are more consistent and yield as much as seven times more than field grown crops.

Ontario has about 1,150 greenhouse operations and a total area of 3,200 acres under glass.

To participate in the Vineland greenhouse tours on June 3, please visit www.vinelandresearch.com/events to register.

Tours are offered every half hour between noon and 3:30 pm and pre-registration is required.

Since this is a working greenhouse, be sure to wear closed-toe shoes for the tour.

The greenhouse construction was funded through multiple partner contributions that included a portion of the Ontario Ministry of Agriculture, Food and Rural Affairs’ (OMAFRA) start-up capital investment in Vineland, made in 2008.