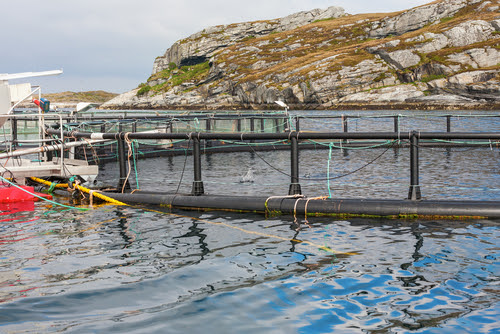 A new pump that uses air to circulate water is being developed at the University of Guelph, and it could make some favorable waves in the aquaculture industry.

Known as the Airlift Pump, the device is intended to replace costly and energy-hungry circulation machinery at both inland and open-water fish farms. It’s versatile, energy efficient, and even has some unintended and rather positive side effects on water quality.

According to principal researcher Wael Ahmed, associate professor at Guelph’s School of Engineering, the Airlift Pump is an aeration system using a specially designed dual air injector, and runs using the physics of buoyancy.

As water flows into the pump, air is injected at a specifically controlled rate. Farmers can change from continuously injected air to a pulsating injection mode, depending on need, with aerated water then making its way back to the a farm’s fish enclosures for circulation.

“Conventional circulation equipment is all mechanical, and that draws a lot of power. Our pump has no mechanical parts – the bubbles are the moving force, and the air supply is the only thing that uses energy,” says Ahmed. “Our test trials have shown a 50 to 70 per cent reduction in energy usage. On a 40 acre farm, for example, that translates to about $15,000 a year in energy savings.”

“With the low energy requirement to operate such pumps, solar-powered units will be perfect fit for many aquaculture sites located in remote areas,” he adds.

Considering the ever-rising cost of energy, such savings could certainly make an ocean of difference to farmers coping with both high production costs and relatively thin profit margins. And as there are no moving parts in the pump, Ahmed says producers would save on maintenance costs as well – not to mention all the headaches that come with malfunctioning equipment.

“By our calculations in the lab, the return on investment for these pumps is between one and three years,” he says.

The Airlift Pump helps maintain water quality too. In inland, closed-tank fish farms, for instance, the pump’s bubbles act as a clarifier and help clear impurities from the water – something very useful to farmers who spend considerable time, energy, and money on complex water treatment systems.

Farmers working in an open water environment can even use the pump to play on the natural physiology of fish. By moving water between the surface and bottom of a given area, farmers can optimize water temperature and stimulate comparatively sluggish fish into more regular feeding, which is good for animal health and overall productivity.

“It can even be used in winter to help prevent freezing, and year-round to facilitate the recovery of solid wastes,” says Ahmed.

The next step involves installing the circulation system at four different farms in Ontario – two inland tank-system farms and two open water farms. If tests are successful, the Airlift Pump could be on the market within the next few years.

The current and prototype stages of the project were both funded through the Gryphon’s LAAIR (Leading to Accelerate Adoption of Innovative Research) program, which is supported by Growing Forward 2, a federal-provincial-territorial initiative.