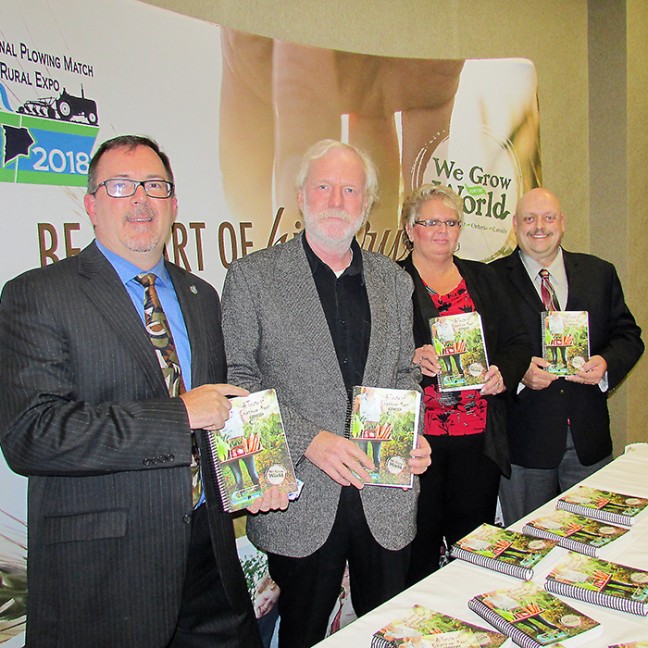 The new recipe book for the 2018 International Plowing Match in Chatham-Kent was formally released Wednesday prior to the annual Rural Urban Awards Dinner.

Featuring hundreds of recipes from around the municipality, the 2018 IPM Cookbook has everything from desserts to entrees, and all with a local flair.

Leon Leclair and Darrin Canniff were at the dinner to discuss the cookbook and plans for the 2018 IPM.

The event is expected to draw up to 100,000 visitors to Chatham-Kent.

The cookbook has been under development for two years.

“We sent out the first media saying “we are looking for recipes folks”, got two [responses] in in the first week and panicked,” Crouch said, smiling. “[Soon] we got them in by the hundreds, and said how are we going to go through all of these recipes?”

All submissions were either from people in Chatham-Kent or those recently removed from the municipality. Priority was given to recipes emphasizing local produce and photographs throughout the book reflect Chatham-Kent.

Those pictures were taken by Krystle VanRoboys, a local photographer and agriculturalist.

“Top notch,” LeClair said. “Quality people did the work … we’re very proud. The influx of the number of recipes that came in is a testament to how many people want to be involved in this match. It’s going to be a community-wide event.”

It’s the second International Plowing Match Cookbook to come out of Chatham-Kent. The last time the municipality was host to the event, 1979, they printed a far smaller edition, only 20 pages or so.

The new edition is almost 500 pages.

The book will be sold for $15, and can be purchased at North Kent Mutual Insurance in Dresden. All money raised will go toward funding the IPM. Any money left over after the event will be distributed to local charities and nonprofits in Chatham-Kent.

For more information on the book or event, be sure to check out plowingmatch.org/ipm2018.