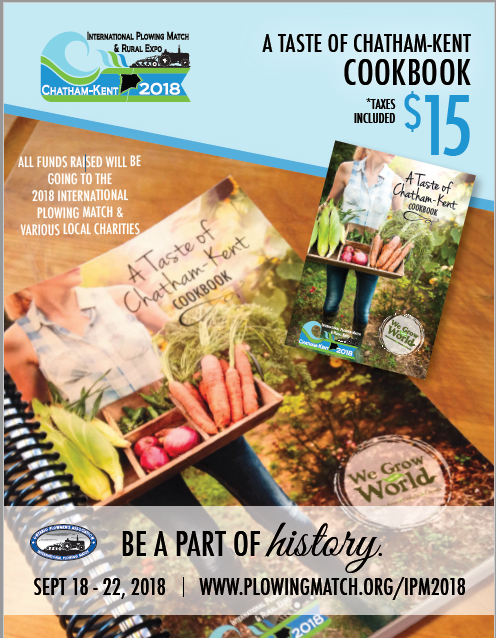 Each year, the International Plowing Match and Rural Expo cookbook is a much sought-after souvenir, and residents

of Chatham-Kent have contributed more than 1,000 recipes to make the 2018 edition a reality.

Following two years of planning, countless discussions of food themes, and the desire to have recipes that reflect the

many food products produced locally, the cookbook is ready for release and is being launched at the 2016 Chatham-

“It was a team effort by the committee, and everyone who sent in recipes contributed to that effort,” says committee

“We know the cookbook is a popular souvenir that is collected by a large group of people,” said 2018 International

Expo and we are delighted that it has come together so well.”

The book will be available exclusively in Chatham-Kent before being offered province-wide starting next October.

The $15 price includes taxes, and part of the proceeds will be distributed back to the community through local

be available for sale at the North Kent Mutual Insurance Office located in Dresden, and at other retailers that will be

announced in the new year.

“The cookbook showcases many of the different crops and foods produced here in Chatham-Kent,” said co-chair Leon

Leclair. “You can use those crops in a lot of these recipes, and enjoy what we grow.”