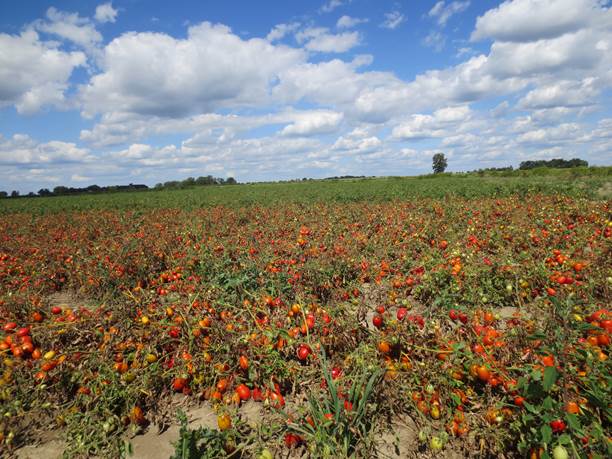 By Owen Roberts for FCC Express

Heat and excessive rain made it tough for some Ontario tomato producers this year, but in the end, most fulfilled their contracts and processors received their required volume.

Ontario’s 90 tomatoes producers in Essex and Kent counties realized a 500,000-ton harvest from 12,000 acres of production.

That’s consistent with their performance over the past decade, says Dresden-area farmer Phil Richards, a director with the Ontario Processing Vegetable Growers Association.

In fact, the processed volume is similar to the amount of tomatoes processed prior to Heinz leaving Ontario, despite the weather.

“It was a challenging and unusual season, considering the weather we went through,” Richards says. “But in the end, most farmers are pleased with their crop, and got their contracted tonnage.”

He says most processors received their contracted tonnage, except for one, to whom growers were only able to deliver a portion of it. Weather caused problems during harvest. Excess heat and rain had led to premature ripening and fruit breakdown in the field, which made harvest difficult.

“On paper, production will go down as an average year,” he says.