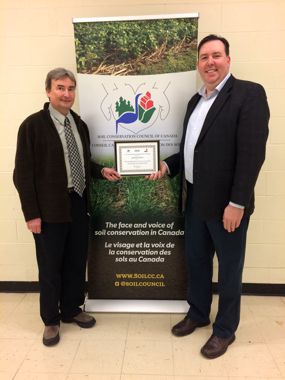 The Soil Conservation Council of Canada (SCCC) has announced that Adam Hayes is the 2016 winner of the L. B. Thomson Conservation Award.

Hayes was presented with this honour by Alan Kruszel, Chair of the SCCC on Jan.4 at the SouthWest Agricultural Conference in Ridgetown, Ont.

“The L. B. Thomson Conservation Award is presented annually to recognize individuals, organizations, and others who have made outstanding contributions to improving soil and water conservation at the regional level in Canada,” says Kruszel. “Adam is particularly deserving of this award as he has committed more than 30 years of his career to understanding soil health and conservation practices in Ontario.”

Adam grew up in Peterborough, Ont. and completed his B.Sc. (Agr.) at the University of Guelph in 1984. After a brief period of private consulting Adam began his career in soil conservation with the Ontario Ministry of Agriculture and Food (OMAF) in 1985.

Since then, Adam has spent his entire career better understanding soil health and conservation, and working with Ontario farmers to put superior management systems into practice to optimize production and sustainability.

Adam has been called the epitome of a fine extension specialist. Now working for the Ontario Ministry of Agriculture, Food and Rural Affairs, he is equally effective whether setting up a cover crop trial with production-oriented farmers, presenting tailgate talks on aggregate stability, or exploring soil secrets alongside university research scientists.

The L. B. Thomson Conservation Award is one of many honours bestowed upon Adam that reflect the vision, leadership and depth of knowledge that have made him a leader in soil conservation and health in Ontario.

« Do-It-Yourself Blueberries Coming To A Garden Centre Near You Top Economic Drivers Of 2017: Canadian Dollar »