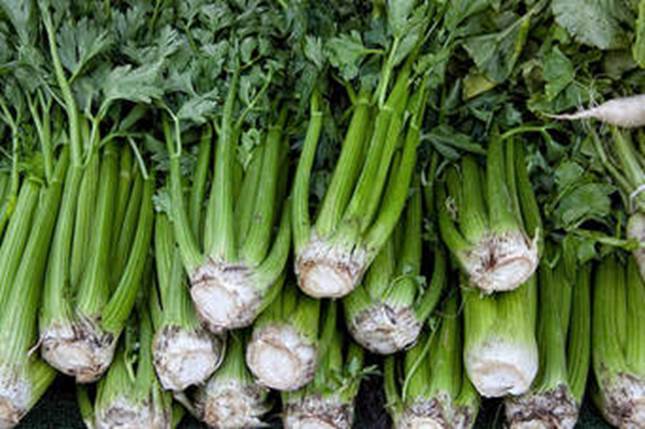 I have been taking celery to work every day and eating them as a snack. I don’t know much about celery, so I thought we all could learn a bit.

In the past, celery was grown as a vegetable for winter and early spring; it was perceived as a cleansing tonic, welcomed to counter the salt-sickness of a winter diet without greens based on salted meats. By the 19th century, the season for celery had been extended to last from the beginning of September to late in April

In North America, commercial production of celery is dominated by the cultivar called ‘Pascal’ celery. Gardeners can grow a range of cultivars, many of which differ from the wild species, mainly in having stouter leaf stems. They are ranged under two classes, white and red. The stalks grow in tight, straight, parallel bunches, and are typically marketed fresh that way, without roots and just a little green leaf remaining.

The stalks are eaten raw, or as an ingredient in salads, or as a flavoring in soups, stews, and pot roasts.

Celery is eaten around the world as a vegetable. In North America the crisp petiole (leaf stalk) is used. In Europe the hypocotyl is used as a root vegetable. The leaves are strongly flavoured and are used less often, either as a flavouring in soups and stews or as a dried herb. Celery, onions, and bell peppers are used in Cajun cuisine. Celery, onions, and carrots make up the French mirepoix, often used as a base for sauces and soups. Celery is a staple in many soups, such as chicken noodle soup.

Celery is also among a small group of foods (headed by peanuts) that appear to provoke the most severe allergic reactions. For people with celery allergy, exposure can cause potentially fatal anaphylactic shock

The benefits of celery begin with it being an excellent source of antioxidants and beneficial enzymes, in addition to vitamins and minerals such as vitamin K, vitamin C, potassium, folate and Vitamin B6.

Administered as an anti-hypertensive agent in folk medicine for centuries, celery continues to prove that there are many cardiovascular benefits. In recent pharmacological studies, celery demonstrates both antioxidant and anti-inflammatory activities that help improve blood pressure and cholesterol levels, as well as prevent heart disease.

Celery also provides dietary fibre, especially when you eat more than one cup at a time, which boosts digestion and weight loss. In addition, celery’s high percentage of water and electrolytes can prevent dehydration, and special compounds help celery act as a diuretic and reduces bloating. As a supplier of antioxidant flavonoids, other significant benefits of celery include its ability to improve liver, skin, eye and cognitive health.