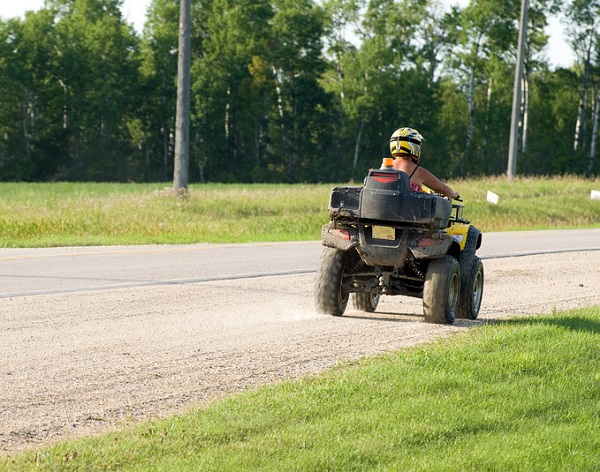 The Municipality of Chatham-Kent has passed a by-law that permits the use of off-road vehicles on highways located within Chatham-Kent.

In the Province of Ontario, off-road vehicles are regulated under the following legislation:

The HTA and Regulation 316/03 allows the council of a municipality to pass by-laws permitting specified off-road vehicle classes on highways, or part of the highway, during specified months and hours. Chatham-Kent Off-road Vehicle By-Law #32-2017 has been passed to permit ORVs on all highways except those specified in the by-law.

All ORVs are prohibited from Highway 401 and all other Provincial 400 series highways.

The classes of ORVs shown in Table 1 may be operated on Chatham-Kent highways, where permitted.

Both the permit and license plate are issued by the Ministry of Transportation at a ServiceOntario Driver’s License Office. Information for obtaining permits and plates for ORVs can be found at the following link:

To operate an ORV on the highway, the HTA requires the operator to be at least 16 years of age and hold at least a valid G2 or M2 driver’s license. All riders must wear an approved motorcycle helmet and where applicable, wear a seat belt.

Rules of the Road

Off-road vehicles must be driven on the shoulder of the highway. If a shoulder is unavailable, obstructed, or not wide enough to fully accommodate both left and right wheels of the vehicle, the ORV must be driven on the roadway. The ORV must always be driven in the same direction as the traffic flow and must run as close to and parallel with the right edge of the shoulder or roadway, whichever is applicable, as can be done practicably and safely. Other regulations generally prohibit ORVs from highways under construction or maintenance, and specify rules for making left turns from one highway to another.

The HTA regulates ORVs to the following speed limits on highways:

The HTA also permits municipalities to pass by-laws that prescribe a lower rate of speed than those described above. However, the HTA defined speed limits for ORVs remain in effect in Chatham-Kent.

« Irrigation Water Sampling Videos Did You Hear? We’ve Made Great Improvements To The Agricultural Information Atlas! »