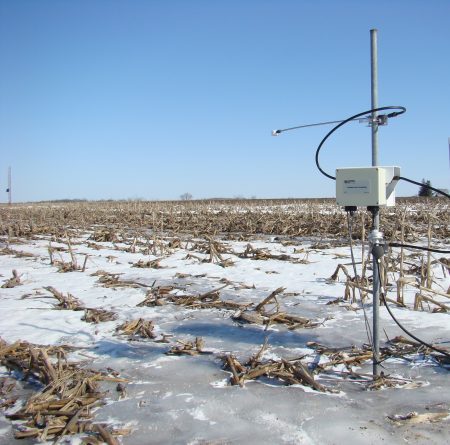 Spring thaw of croplands is a big and overlooked contributor to global greenhouse gas emissions, according to a first-ever study by University of Guelph researchers.

This groundbreaking research reveals that worldwide emissions of nitrous oxide (N2O) from agriculture are underestimated by as much as 28 per cent.

“Up until this point, no one has accurately calculated just how much nitrous oxide is released from the thawing of cropland,” said environmental sciences professor Claudia Wagner-Riddle, the study’s lead author. “Our study shows that a big chunk of agricultural emissions is not being considered, making it even more urgent that we find a way to manage and reduce these emissions.”

This research was recently featured in the National Post and garnered attention from media across Canada including the Montreal Gazette, Calgary Herald and Edmonton Journal.

Along with geography professor Aaron Berg and post-doctoral researchers, as well as researchers at the University of Manitoba, Wagner-Riddle also collected emissions data from 11 cold climate sites around the globe.

In the Northern Hemisphere, annual freezing affects areas of intensive corn, wheat and soybean production in the United States, Canada, China and Northern Europe. Cropland is a major source of N2O because inorganic fertilizer, manure and legumes provide nutrients for N2O production by soil microorganisms.

“When the soil thaws, the nutrients that were sitting dormant are released so there is an increase in microbial activity, which results in the production of nitrous oxide,” said Wagner-Riddle.

After carbon dioxide and methane, N2O is the most potent greenhouse gas, trapping heat and contributing to global warming. It also destroys stratospheric ozone, which protects the planet from harmful ultraviolet rays.

“Freeze-thaw emissions are not constant but rather are released in pulses,” said Wagner-Riddle. “You never know when these pulses will occur.”

Using an automated monitoring system developed at U of G, the team took air samples every 30 minutes over the course of the study.

They discovered that more nitrous oxide was released at thaw after soil temperatures had remained below freezing longer, so colder winters meant higher emissions.

Wagner-Riddle said farming practices that keep the ground warmer — such as planting perennial crops that leave behind biomass, and not tilling soil — will help reduce emissions.