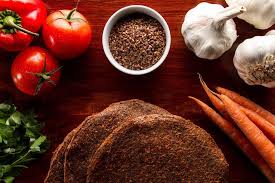 Joanne Van Liefland never pegged herself an entrepreneur. But that was before she brought some of her homemade, vegetable-based wraps to a meeting that caught the taste buds of a store owner.

That was 2012. Van Liefland had a full-time job in education, and was making the dehydrated, raw wraps for herself, family and friends to satisfy her craving for bread-like products after switching to a raw food diet.

The chance tasting led to her first order. Six months later, she launched Wrap It Up Raw.

Her food business manufactures organic, vegan wraps with no gluten, wheat or dairy in St. Catharines, Ontario, and sells them in 150 independent food stores in Ontario, Quebec, Saskatchewan, Alberta and BC.

“It’s been quite a surprise at how easily the business has grown,” says Van Liefland, a registered holistic nutritionist. “Customers have come to me, I didn’t even go looking.”
The marketing ease makes up for the hands-on, labour intensive nature of the business.

Made primarily of carrot and flax seed, the wraps also contain sun-dried tomatoes, red pepper, lemon juice and seasoning, and 6 g of fibre. Raw ingredients are mixed together, then shaped by hand into the flattened pancake wrap shape and placed in dehydrators to finish the process over several hours.

Van Liefland runs the entire business with three employees, including her daughter as production manager. While the wraps are labour intensive to create, they are almost effortless to market.

“In the last four to five years, business has grown entirely through word of mouth and social media” says Van Liefland. “I get calls from local stores who have customers asking for our wraps, and I get calls from customers who want to be able to buy them locally.”

Her biggest challenge is equipment.

“The capacity of my machines is the main thing holding me back. We have another flavour all ready to go but just don’t have the time to add it to our production line,” she says.

“Working with Bioenterprise also connected me with other businesses, and that led to larger dehydrators to improve our production capacity,” she says.

Van Liefland knows automation is the next step for Wrap It Up Raw.

“We have a lot of interest outside Canada, but I’m not knocking on the doors of bigger food stores until I know we can keep up with the orders,” she says. “I need to connect with someone who can help us automate our process.”

And she knows it will happen. Van Liefland’s can-do attitude clearly plays a big part in her unexpected, entrepreneurial success.

“I know we have a great product. And I never say no to a meeting or phone call. It might be the opportunity that will connect us to the next step,” she says.