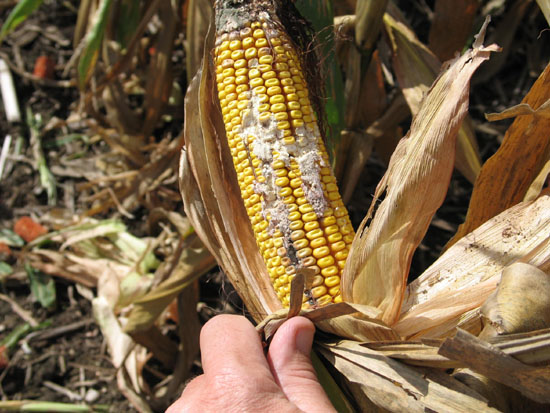 With assistance from the Ontario Agri-Business Association (OABA) and funding through the Grain Farmers of Ontario, Ontario Ministry of Food and Rural Affairs (OMAFRA) and Agriculture and Agri-Food Canada (AAFC) will begin sampling grower corn fields to determine ear mould incidence and occurrence of mycotoxins in the grain. These mycotoxins, particularly vomitoxin (DON) produced primarily by Gibberella/Fusarium ear moulds can be disruptive when fed to livestock, especially hogs. The purpose of this annual survey is to access grower and industry risk.

What can growers do? As corn producers plan for harvest they should be assessing their fields for stalk rot and ear moulds. The distribution and prevalence of these diseases vary from year to year but they are present every year, especially when the crop is planted late or under stress (water stress, insect feeding, etc.). Growers should assess fields each year because these pre-harvest assessments can alert them to potential problems and provide time for livestock producers to segregate, obtain alternative grain, or hold onto stored corn from the previous year.

Scouting practices are similar for all corn ear rots. Begin scouting fields at late dent stage to determine the presence and severity of ear rots. When scouting, randomly select plants and pull back the husk to examine the entire ear. A quick method is to select 100 plants across the field (20 ears each from five different areas). For each ear, be sure to peel back the husks and examine the entire ear. Fields with 10% of ears having significant mould growth should be harvested sooner than later.

Preventing ear rots and mould can be difficult since weather conditions are critical to disease development. Although some tolerant hybrids are available, none have complete resistance. Crop rotation reduces the incidence of some ear rots, as well as several foliar fungicides aimed at suppressing ear rots have been registered. Cultural practices have been shown to have limited success in preventing ear and kernel rots. Minimize these diseases through timely harvest and proper drying and storage.