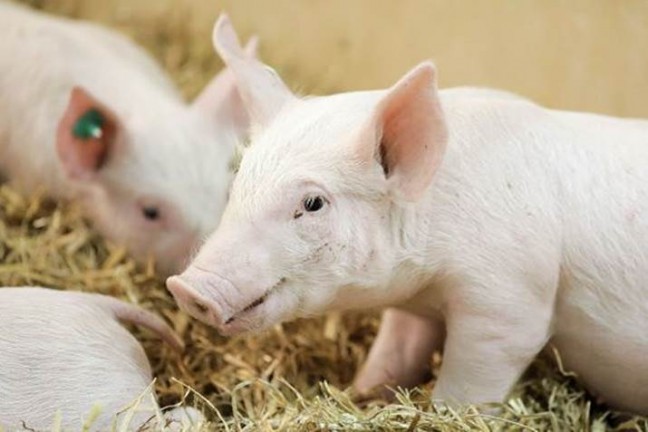 A new genetic test offers a boost to swine litter sizes in Canada. The result of more than 25 years of genetic research has led Prof. Allan King to identify a chromosome abnormality in male reproduction, including boars, that results in smaller litter sizes – and develop a genetic screening process to detect the fertility flaw.

“The abnormal chromosome in boars, male pigs, causes lower litter sizes, typically 3-4 fewer piglets per litter,” explains King, Professor and Canada Research Chair in Animal Reproductive Biotechnology at the University of Guelph’s Ontario Veterinary College. “Those numbers can add up to $100 in lost revenue, on average per litter. We’ve developed a simple blood test that can identify boars with the abnormal chromosome and rule out the problem before any breeding, ensuring average litter sizes at minimum.”

Approximately two per cent of hogs have the abnormal chromosome, and if used in a breeding program, could also pass the genetic makeup onto the offspring as carriers, carrying on the genetic fertility issue.

Farrowing operations and breeders would be most affected by this genetic abnormality, making the screening test a sound investment in their swine genetics and herd performance.

“The blood can be taken and tested before a boar produces semen,” says King. “This makes it easier and more cost effective for breeders to identify hogs and genetics for reproduction.”

While the blood test is labour intensive at the lab, the process for hog farmers to test their boars is straight forward: simply mail a blood sample to King at the University of Guelph’s Animal Health Lab.

King began this genetic research in the 1970s and has spent the last year assessing the marketplace for commercial genetic testing.

“We’re improving Canada’s swine genetics, but this research and screening process could have international applications,” he says, having already fielded inquiries from other countries interested in the genetic testing.

The abnormal chromosome screening and testing can also be to species like cattle and horses.

“The return on investment for screening the abnormal chromosome for hog farmers is clear; genetic testing is a function of evaluating prospect boars for a genetic pool and removing poor performers,” King explains. “This is a different approach to genetics; it makes sense for hog breeders and farmers and has so many other potential applications.”

The project research was developed with funding support from the OMAFRA-University of Guelph’s Gryphon’s LAAIR (Leading to Accelerated Adoption of Innovative Research) program. The Gryphon’s LAAIR is supported through Growing Forward 2, a federal-provincial-territorial initiative.