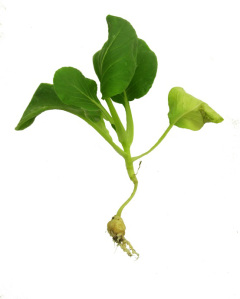 The results from a soil survey and on-farm experiences in 2017 have shown that clubroot is widespread across Ontario; it is present in nearly all canola growing regions. To date approximately 130 soil samples have been taken from fields with a history of canola, and clubroot was detected in 12 samples.

Work is underway to determine the pathotype (strain) of clubroot present in each soil or plant sample, so that farmers can select the appropriate clubroot-resistant variety. From four samples analyzed so far, Pathotype 2 has been most common with a single case of Pathotype 8.

Farmers who found clubroot in their canola fields in 2017 experienced some yield loss. Some fields with short crop rotations had clubroot symptoms in large areas of the field (along with significant white mould infection) and reported up to 75% yield loss.

Other farmers saw patches of clubroot at the edge of the field, or in areas of the field that were wetter. It is likely that all of these fields were initially infected in past years, and the number of clubroot spores in the soil has been increasing over time through reproduction on infected canola crop plants and volunteer canola.

For the complete report, go to fieldcropnews.com.