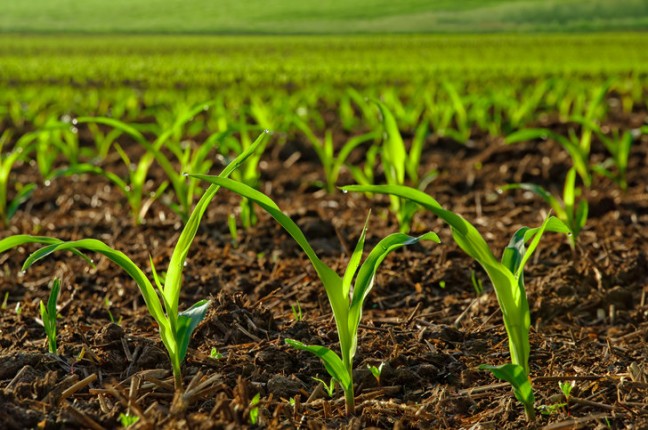 Physics, the science of the cosmos, is critical to our understanding of the natural world – and on a more practical agricultural level, it might be able to help improve crop yields.

According to entrepreneurs and former University of Waterloo students Amir Zhumagulov and Ilyas Ashirov, physics – or a force within the science called electromagnetism – can be used to stimulate grain seeds into earlier and more productive growth.

If done at the right time, Zhumagulov says electromagnetically stimulating grains like wheat, corn, and rice can hasten germination time and facilitate early root development. In turn, this gives farmers a more uniform and early crop, which can translate to higher, more consistent yields.

“Every seed comes with its own nutrients so it can start growing,” says Zhumagulov. “Before planting, low-frequency electromagnetism can be used to stimulate how fast enzymes in the seed begin breaking down the starch and proteins contained within it, giving the seed a more vigorous start. Faster root development also comes from increases in protein synthesis within the seed.”

“We’ve seen initial growth begin as much as two days earlier than untreated counterparts,” he adds.

Previously, this yield-improving technology has shown a 20 per cent average increase in wheat yields in large field trials on the central Asian steppes of Khazakstan and Russia – which are also Zhumagulov and Ashirov’s home areas and the place of the technology’s origin. Improvements in small test trials in Ontario have also been seen in the last growing season.

However, stimulating seeds with electromagnetism requires both an algorithm to determine when a seed should be treated – based on the location of the farm – as well as a transportable device to actually perform the task.

The algorithm, says Zhumagulov, is designed to account for biological differentiation among seeds. More specifically, that means it analyzes protein levels, starches, and other characteristics to determine the optimal time for treatment.

“Because the optimal time for treatment can vary, we can’t operate a fixed facility the same way someone who adds protective seed coatings can,” says Zhumagulov. “Our treatment device has to be mobile and flexible, and be able to actually visit farms for the treatment to be viable. The current working prototype fits in a standard briefcase and is powered off of a car battery.”

With their current equipment, Zhumaglov says they can treat between 30 to 40 tonnes of seed in fewer than 30 minutes. After treatment, farmers have a two week time frame to plant the seeds before the electromagnetic treatment begins to wane. After that, the effect begins to diminish at a steady pace.

Having just established their own company, Upgrain Inc., Zhumagulov and Ashirov plan on expanding their Canadian research trials to larger plots during the coming growing season. They will be looking specifically at wheat, though plan on expanding to other crops from there.