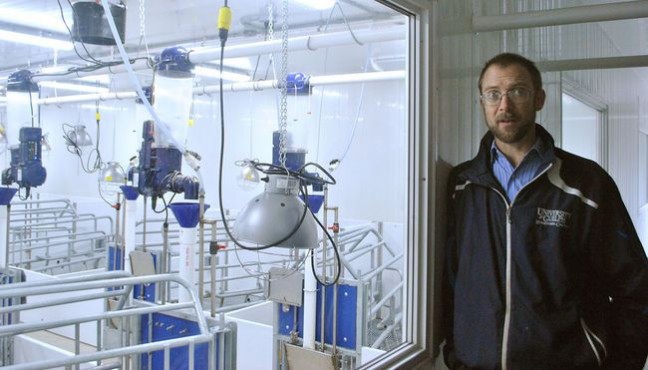 By Tom Morrison, The Daily News

Paul Luimes, a livestock nutrition college research professor at the Ridgetown Campus of the University of Guelph, speaks about the farrowing room while providing a tour of the campus’ new swine barn on Feb. 21. (Tom Morrison/Postmedia News)

The new swine barn at the Ridgetown Campus of the University of Guelph offers students the chance to use “state of the art” equipment, a professor at the campus said following tours of the facility.

The $500,000 project opened to students in September. Paul Luimes, a livestock nutrition college research professor at the campus, said it is a big step up from the old barn they had been using.

“It’s neat that we can show our students the top-end stuff,” he said. “It’s a small barn, I recognize that, but one of the nice things about that is that I think it also makes it easier for us to keep it up to date.”

Luimes gave tours of the new barn during the Southwestern Ontario Pork Conference held at the campus last week.

The 6,600-square foot facility was funded by the Ontario Ministry of Agriculture, Food and Rural Affairs, with 20 per cent of the cost coming from Ontario Pork.

The barn holds 10 female pigs at a time and has separate rooms for each stage of their pregnancies.

The gestating room holds the female pigs, or sows, until four days before they give birth.

“You can’t feed a sow as much as she wants to eat or she’ll become obese,” said Luimes. “That’s why that feeding system is in there that it can actually individually feed every sow exactly how much she needs.”

The pigs then move to the farrowing room for the final four days of their pregnancies. They give birth in this room and are kept in small crates “to protect the piglets from getting crushed because sows will lay down on their piglets,” said Luimes.

After 24 days on average in the farrowing room, the piglets move to the nursery room where they are given “some special feed and more expensive feed to help them get growing,” he said.

“It’s warmer usually in there because the piglets are still relatively small and they lose their mothers as a heat source,” he said. “You put them in there and they grow up there until they’re about 25 kilos.”

Once they reach that desired weight, they are taken to the finishing room, which is located on the opposite side of the barn.

The students enter these rooms after going through biosecurity protocols.

He said the campus is also working towards incorporating pregnancy detection in its use of the barn.

The students who plan on bringing back what they learn at the barn to their family farm may not have access to the same equipment at home, but they’ll know how to manage it if they decide to use it in the future, said Luimes.

“At the end of the day, every farm is a little bit different but there’s some kind of basic management to at least learn how to see what impact the management has on the animals,” he said.

Along with the 10 sows, the barn can hold about 150 market hogs. Students in the veterinary technology program also use the barn.

Ken McEwan, director of the Ridgetown Campus, said the barn provides students with “a significant number of experiential learning opportunities.

“It features some of the state of the art technology with precision sowfeeding and high-tech data recording, so it’s a great addition to our applied educational opportunities that we offer to our students,” he said.

Luimes said the barn is also used in a general livestock class, which is taken by students who may not have any interest in pork production.

However, he said these students may end up becoming a representative for the Ontario Federation of Agriculture, for example, and what they learn in the swine barn could be useful in that role.

“They have to represent all the farmers in their area, not just the ones that they’re familiar with, so it gives them an opportunity just to understand a little bit more of that,” he said.