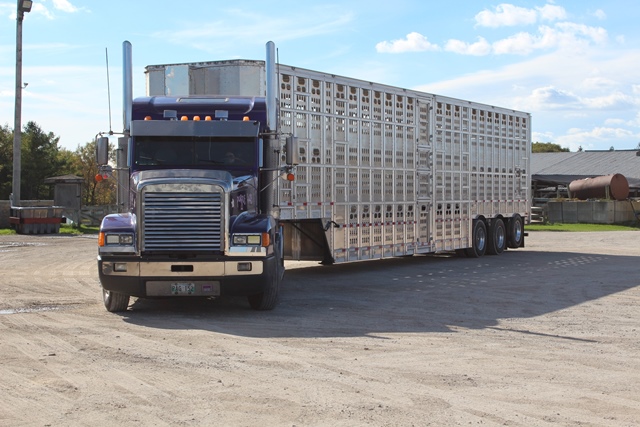 A new sensor-based tracking system for livestock could provide peace of mind for farmers, food companies and consumers that animals are being treated humanely during transport.

Block chains are a digital ledger of all transactions in a supply chain – information is passed along digitally as an attachment to the chain instead of through a paper trail and the permanent links between the blocks eliminate the possibility of data tampering.

“The devices currently monitor conditions like humidity and temperature inside a trailer, but could in future also track things like CO2 levels, acceleration and breaking to ensure livestock arrive at their destination safely, alive and healthy,” explains Kristen Celotto, part of the Transport Genie development team. “And if animals are injured or die in-transit, the sensors can indicate what went wrong and when.”

Although there are already other sensors on the market that do similar tasks, Transport Genie’s advantage is that it provides the information in real-time – to the transport driver, as well as dispatchers and others who wish to receive notifications via email or text message.

“Older devices only record data but that doesn’t help in transit. Our sensor will tell you immediately if the temperature is getting too high, for example, so that drivers can take action right away based on accurate real-time data,” says senior developer Idris Soule.

Small sensors are placed in various areas of the transport trailer that record data and transmit it to a server. They’re also connected to a monitor in the truck’s cab and automatically send alerts if they notice changes in temperature or humidity. If the server connection is dropped, the information is stored in the cab and uploaded once the system goes back online.

“Our data is compact so it doesn’t take a lot of space, and the onboard cab device accepts SD memory cards,” says Alexander Evans, another development team member, adding that data will be securely stored for years, not just days or weeks.

Transport Genie is customizable to different livestock species as well as different types and sizes of trailers. The sensors have battery life up to three years and are specifically built to withstand the rigours of truck biosecurity washing, drying and disinfecting procedures.

The company has applied for a patent for its technology, and will be exhibiting at upcoming industry events, including the Ontario Pork Congress. A soft-roll out with a few early interested customers is expected to begin shortly.

“The information we gather will give farmers, transporters and processors assurance that the livestock they’re shipping, handling or receiving are humanely transported – and it gives food companies the ability to confidently stand behind animal welfare declarations on their products,” Soule says.

Transport Genie has received funding through the Accelerating Innovative Research program, which is administered by Bioenterprise and supported by the Ontario Ministry of Agriculture, Food and Rural Affairs.

« TRADE DEVELOPMENTS WITH THE U.S. AND CHINA OFA REITERATES RESPONSIBLE LAND USE POLICIES TO GOVERNMENT »