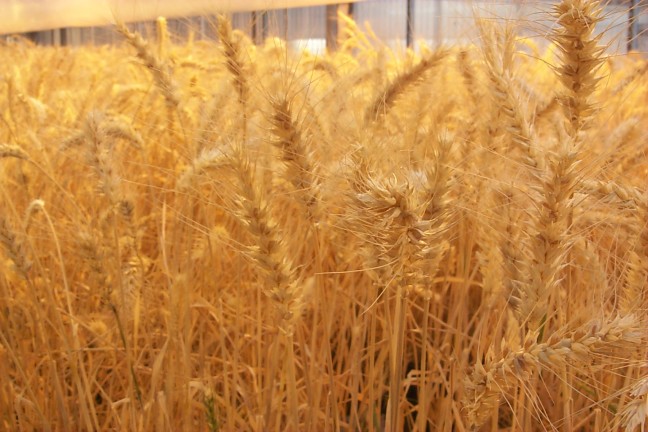 The Canadian Food Inspection Agency (CFIA) has announced the discovery of unapproved genetically modified (GM, also called genetically engineered) wheat near a farm in Alberta, but says the contamination is an isolated event.(1)

“We’re relieved this is an isolated contamination case but we’re concerned that the government couldn’t determine how it happened. Without knowing the cause, contamination could happen again,” said Lucy Sharratt of the Canadian Biotechnology Action Network (CBAN), in a news release on June 15.

Monsanto’s glyphosate-tolerant GM trait was found in several wheat plants on a road in southern Alberta in 2017. The Canadian Food Inspection Agency was unable to identify the cause.

“A less isolated GM wheat contamination incident could be devastating to Canadian farmers and the future of our wheat exports,” Thibault Rehn of the Quebec network Vigilance OGM, “We can’t afford to be careless with GM crops because it’s difficult or impossible to reverse contamination once it occurs.”

Genetically modified wheat is not approved by any government and is therefore illegal. No GM wheat has ever been commercially grown or sold in any country in the world. Monsanto last grew test plots of wheat with this GM trait in 2004 in Canada.

In 2004, Monsanto withdrew its request for approval of its GM herbicide-tolerant (glyphosate-tolerant) “Roundup Ready” wheat in Canada and the U.S. due to pressure from farmers and consumers along with international market rejection.

There have been three contamination incidents in the U.S. with Monsanto’s GM wheat – in 2016, 2014 and 2013. In 2013, several countries suspended wheat imports from the U.S. after GM wheat plants were discovered in a farmer’s field. The U.S. government was unable to determine the cause of that contamination. (2)

“Farmers should be consulted before GM crops are tested outside the lab. We need to determine if the economic risk is too high to field-test certain GM crops,” said Sharratt.

The exact locations of experimental GM crop field trials in Canada are not disclosed.

“We need to protect our bread basket from rogue GM traits,” said Sharratt.

NOTES:
(1) The detection report and related documents from the Canadian Food Inspection Agency are posted at http://inspection.gc.ca/wheatdetection
(2) Media background on GM wheat is posted at www.cban.ca/wheat

The Canadian Biotechnology Action Network (CBAN) brings together 16 groups to research, monitor and raise awareness about issues relating to genetic engineering in food and farming. CBAN members include farmer associations, environmental and social justice organizations, and regional coalitions of grassroots groups. CBAN is a project on the shared platform of Tides Canada.

Vigilance OGM is a network of diverse groups and individuals in Quebec including farmers, environmentalists, consumers, and citizens who are concerned with what we eat every day and the health and environmental impacts of using genetically modified crops.