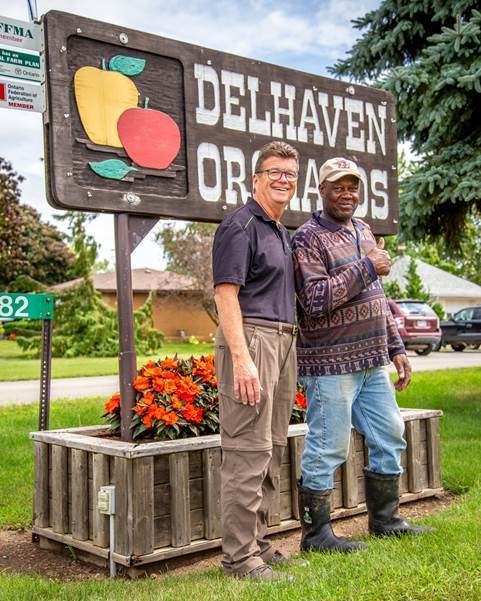 Last week, we looked at our off shore workers and the positive impact they have in our work place and in our community.  This week, I want to introduce you to Hopeton Thompson, one of the off shore workers I had the opportunity of recently meeting.

Hopeton was born in Jamaica 57 years ago, is married to his beautiful wife Angella and they have six children, ranging in age from 20-40 years old. He also has one sister, two brothers and many more family members living in Jamaica.

Hopeton decided to make the effort to help his family in a very tangible way by looking into finding a job in Canada.  He applied to his government and the Canadian government, and after a selection and health check process, arrived here in 1987.

When he was approved, he only knew he was coming to work somewhere in Canada.  Hopeton ended up in Kent County, and his first employer was Hector Delanghe, owner of Delhaven Orchards in Cedar Springs.  In fact, Hector has been his only employer, as Hopeton has been coming to work for Hector for the past 31 years!

When he first arrived in our area, it was tough for him.  His mind was always back home.  Spending time away from the people you love was difficult and still is for him after 31 years, but he and his family members are getting used to these long times apart from each other.

There is a reason Hopeton has been coming back to Delhaven Orchards for the past 31 years.  It has to do with him wanting to work with the people he has come to call his second family.  He feels Hector and his family, along with his fellow workers, have become his second family here in Canada.

Hopeton told me he was quite shy when he first met Hector and it took time to get to know each other, just as it does in any relationship.

Hopeton comes to Canada for eight months, from April to November.  He, along with 19 other workers, lives on the farm property in a large bunkhouse, divided into three sections for more privacy.

When Hopeton first came to Canada, he kept in touch with his family by writing and mailing letters.  Now he can call or text his family whenever he needs or wants to.  He told me back then it took a few weeks to transfer money home, but now the money transfer arrives the next day.

I asked Hopeton what he does with the money he earns.  He transfers most of his earnings back home for his family, which helps with costly school expenses and has greatly improved his family’s lifestyle back in Jamaica.

He told me he and his fellow workers spend approximately 25-30% of their earnings and that money is spent right here in Chatham-Kent.  The earnings go for food, clothes and other merchandise.  They also buy a number of items and ship them back home to Jamaica for their families to enjoy.

Hopeton is a very friendly man and says he always tries to say hello to others he meets in town.  He is very appreciative of this opportunity to work and live in our country. We are appreciative of Hopeton and so many other farm workers who call Canada their second home.

Remember that here in Chatham-Kent ‘We Grow for the World’.  Check out our community’s agricultural website at wegrowfortheworld.com