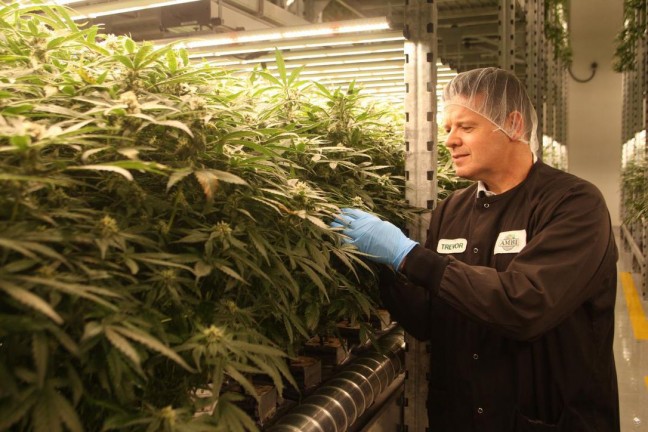 CHATHAM-KENT, ONT. — On the first day of Canada’s marijuana gold rush, the CEO of AgMedica Bioscience Inc. is trying to show a visitor the company’s products online at the Ontario Cannabis Store.

But before Trevor Henry can type out Shiskaberry or Cold Creek Kush, the website crashes.

Henry wonders if the overwhelming surge is as much curiosity as it is pent-up demand for cannabis. He gets an answer two hours later when he learns the one gram packages of Cold Creek Kush, a dried flower recommended for “happiness, hunger, relaxation and/or energy” under AgMedica’s Vertical brand have sold out.

There is low-key earnestness to Henry. Twenty-six years working with animals likely reinforced that approach. He’s on leave from his veterinary practice, trading canines for cannabis, to start AgMedica. He and four other founders, including two from the mushroom business — “just plain mushrooms,” says Henry — are aiming high as they try to push the company to the forefront of cannabis production both nationally and globally.

“It’s come to the point where I have people flying in on private jets from Europe looking to make investments in things like this,” he says, his voice a mix of incredulity and amazement. “If I’d have told my mother five years ago that I was on the way to the airport to pick up someone from Kazakhstan to show them my cannabis facility, she would have told me I was crazy.”

“But there’s a whole level of excitement with the industry as a whole. There’s no question today is a milestone in the country.”

Around most new ventures, there are hopes of limitless potential and possibilities but those feelings seemed amplified at the AgMedica facility Wednesday, given that it was the first day of Canada’s cannabis legalization. Beyond the free lunch, balloons and decorative cake for the employees, there were the rows of empty office furniture left behind by the previous tenant in the downtown office waiting to be filled — the company is hiring at a rate of three new employees a week — and rows of marijuana plants at a spotless, high-tech growing operation that is already expanding.

“We’re building the plane as we’re flying it,” says Henry.

On Friday, as an example, about 60 of the staff pulled an all-nighter, attaching mandatory excise tax stickers — like the ones on cigarettes or alcohol — to packages. It was assumed that, since they were called stickers, they’d be adhesive. Instead, when they arrived on Friday, glue sticks were quickly distributed so each sticker could be applied by hand in order to meet the 11 a.m. Saturday shipping deadline.

AgMedica received its licence to produce medical cannabis in December 2017 and the existing facility yields 6,000 kilograms annually. By January, that will bump by another 20,000 kilograms with a planned expansion within the existing building. So, explains Henry, that’s 26 million grams. If half was in oil and half was in flowers, that would translate into about $320 million in sales in a year. In the future, it is hopes a second facility will add another 40,000 kilograms. AgMedica owns four buildings in Chatham.

“There aren’t too many times that you can say that a Canadian industry is at the forefront of a band new sector,” says Vince Quiquero, a PhD chemist who serves as the company’s chief scientific officer. “That’s what we can say today. It gives us the opportunity to be a leader in this sector globally.”

The medical marijuana market, says Henry, is about $50 billion worldwide and he believes it could grow to $175 billion in three to five years. That remains the company’s top priority but he says recreational cannabis would be a multiple of those numbers. Three times more? Five times? No one is sure he says.

“The bottom line is that it’s a very large market and the industry is just in its infancy,” he says. “There are huge, huge opportunities for Canadian firms right now.”

AgMedica has raised about $70 million through 140 investors; it plans to go public early next year.

The optimism just isn’t at the plant; it’s symbolic that AgMedica’s first facility is in a 200,000-sq-ft repurposed, abandoned car parts factory.

The economy was not kind to Chatham early in the millennium. Manufacturing jobs tied to the auto sector disappeared. The population followed. While the province experienced a population growth of almost 5 per cent, this municipality lost 2 per cent of its residents — or about 2,000 people — between the 2011 and 2016 census. That dropped the population to 101,647. Telling is that, according to one province-wide municipal study, the biggest decline was in the age group between 20 and 44; younger people going where the work is.

Now, a company like AgMedica, is seen as part of the solution as the region rebounds and it fits well in an economy that has agriculture as one of its main drivers.

Chatham native Kristin Wammes, 24, was able to stay here as a junior assistant grower after studying horticulture at the University of Guelph’s Ridgetown campus.

“I think it’ll help keep people local,” she says. “I know there’s been a lot of talk about people moving out of Chatham and out of this area to find other jobs. Coming out of school, I thought I was going to have to move away from home or at least commute every day, an hour or so, to Leamington to have a good job to go to every day. I’m hoping it brings a lot more graduates in from the area, more students.”

It wasn’t long ago that ghostly manufacturing buildings, like the one AgMedica is using, dotted the area but now “there’s very, very few empty buildings and people are returning” says Kim Cooper, an Economic Development Officer with Chatham-Kent, whose area of expertise is in agriculture.

“It’s pretty neat taking something that wasn’t there before and making it into a multimillion dollar business,” Cooper says of AgMedica. “That’s pretty gutsy, pretty innovative and kudos to them for doing that.”

AgMedica employs almost 125 people; 14 months ago, there were just the five founders. Some are locals who stayed but about half, realizing the grass might be greener here, have arrived from places like Guelph with specific agricultural expertise for this new cash crop. They’re renting apartments or buying homes and putting down roots in the area. No one in the company earns less than $16.50 an hour, plus benefits.

One of those new arrivals is Nate Jones, here as head grower after recently graduating from the University of Guelph in agricultural science. From Norfolk County on the shores of Lake Erie, he moved here with his girlfriend — who works in AgMedica’s processing — as one of those young people Chatham is trying to attract.

“There’s about three or four of us from the University of Guelph that all moved here,” he said. “It’s just the opportunity for jobs. Good jobs; you get to practice science on a daily basis. “

It’s a similar story in other areas of the province. On the day cannabis became legal in Canada, Peace Naturals, another marijuana producer, held a job fair in Collingwood to hire 50 general labourers. In Smith’s Falls, Canopy Growth Corp. — which now employs more than 700 — gave its workers stock options when it set up operations in an abandoned Hershey chocolate factory, that new wealth helping to revitalize the town near Ottawa.

Cooper sees AgMedica as “another piece” as the unemployment rate here has improved from 12.1 per cent in 2010 to 5.6 per cent this year.