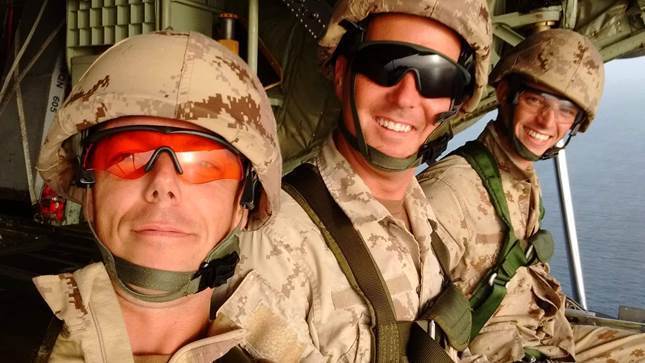 » Kim Cooper » We Will Remember

Corporal Tim Cooper (middle) is with the Royal Canadian Air Force based in Trenton, Ontario.  Tim is the son of Kim & Jill Cooper, and has just returned home to Canada after spending four months with the United Nations peacekeeping mission trip to Mali, Africa.

Remembrance Day.  Men and women displaying a huge array of medals.  Parades.  Tears.  Memories.  We are to be thankful and remember people who died years ago in wars most of us have only read about.  So how can we remember?

It’s not that we don’t care, but rather we don’t really understand.  Most of us have grown up not experiencing war.  In fact, about 75% of Canadians were born after the 1950’s Korean War.

As a boy, my friends and I were fascinated with war.  We were born soon after the close of the Second World War and war stories and movies were everywhere.

I was a former member of the Chatham Kiltie Marching Band.  I recall many Remembrance Day services at the downtown cenotaph playing ‘Abide with Me’ and watching the tears stream down wrinkled and worn faces of men and women.  I did not fully understand the huge significance November 11th held for so many.

Hearing stories of war gave me a glimpse, but seeing things first hand has been life changing.

Vimy Ridge was one of the greatest battles in Canadian history.  I walked through the same World War I trenches our soldiers did 100 years ago.  They were only feet away from the enemy’s trenches.  No wonder so many died.  I saw the rolling landscape around Vimy Ridge due to the thousands of bombs that pounded the land during the battle.  I walked through the underground tunnel.  I saw where our Canadian soldiers slept, ate, fought and died.

In Flanders, near the town of Waragem, I visited the largest Commonwealth war cemetery.  It contained thousands of white markers, row after row after row.  I walked for hours through this cemetery not saying one word.  I read the epitaphs on the tombstones and discovered many of these soldiers were young men, far too young to be lying dead in a field so far from home.  That day was cold, wet and miserable.  I can only imagine the conditions these soldiers endured.  Before I left, I sat and scanned the entire cemetery.  A humble and sobering feeling overwhelmed me, and all my tear soaked eyes could see was the blur of white stones marking the spots of so many young and innocent lives.

Dieppe was the site of one of the great losses in Canadian war history.  I stood and looked out over the beaches of Dieppe and tried to envision our soldiers being cut down by enemy fire before they ever reached land.  This particular evening was cold, windy and stormy, and I stood out in the rain for quite some time thinking of how each lost life had impacted so many others.  I can still remember the wind howling throughout the night, reminding me of the very real horrors of war.

In Japan, the site of the world’s first atomic bomb used in warfare on a populated area was Hiroshima.  The U.S. dropped the bomb in order to try and end World War II.  I watched hundreds of Japanese men, women and children walking past the memorials and reminders of this devastation.  I saw very real evidence of war in the scars, missing limbs and body malformations of hundreds of people.  I walked slowly through the museum and viewed pictures of the horrors that war brings on civilians.  I sat at the very spot the bomb exploded overhead, and tried to imagine the utter desolation and destruction on that August day in 1945.

Buchenwald was one of the largest concentration camps in Germany.  This beautiful country setting played host to a horrific story of human brutality, waste and destruction.  I walked through the camp and museum, trying to understand why tens of thousands of human beings were killed through work, torture, starvation and medical experiments.  I saw the crematorium, viewed the guard towers and peered through the electrified barbed wire surrounding the camp.  I walked around the grounds and saw prisoners barracks, meant to hold hundreds but instead housed thousands.  I stood in stunned silence, overlooking this now serene place.  The setting sun threw shadows across the landscape, and I could almost hear the desperate and anguished cries of men, women and children.

In all of these places, I would sit for hours trying to envision what happened during these dark times in our history.  How could people let this happen?  How can we do such things to fellow human beings?  And yet, wars and atrocities still happen every day in far too many countries.

I have learned many things through these first hand experiences.  But one thing always comes across – there is nothing glamorous about war.  I realize, in a very small way, what hundreds of thousands of men and women and families sacrificed and went through for me.  Freedom meant blood that spilled on fields, oceans and in the air so many years ago and so far away from home.  This paid for that freedom we take for granted today in Canada.

This Remembrance Day, I want to offer my thanks to the men and women who served.  To all the families who lost a loved one, thank you for what you gave up.  To those who sacrificed so much and sent family members over to an unknown land, thank you.  To those who are still living with physical and emotional scars, I am sorry you have carried these wounds for so many years.  For those haunted by memories and still living with past horrors, I am sorry.

My generation and the generations following me do not fully understand what you went through.  But we are so thankful and grateful you did.