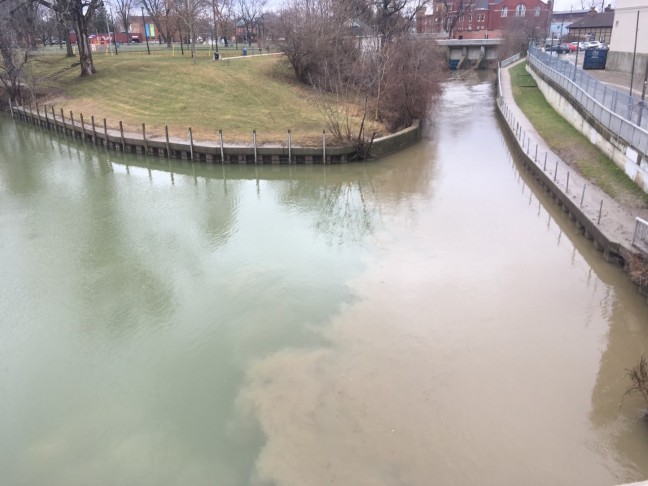 on February 19 | in Ag News | by Jodie Deprez | with Comments Off on Why Is The McGregor Creek Water So Brown?

This is the Forks of the Thames River at Tecumseh Park in Chatham, its junction with McGregor Creek. The McGregor Creek watershed starts on the ridge near Highgate, and includes 54000 total acres and 48000 acres of Chatham-Kent farmland. (Blake Vince photograph)

The McGregor Creek water is extremely muddy, even compared to the water in the Thames River.

This is an example of what happens when it rains, and the soil is not covered with living plants to anchor it down. This was a minor rain event. Lots of storms are much more severe.  According to Gordon McBean, professor emeritus, Western University, London, Ontario, who represented Canada on the Nobel Prize winning Intergovernmental Panel on Climate Change: “We’re dealing with a warmer climate which means more heavy rain events, more risk of high wind events, and more flooding. We should be taking action to reduce our vulnerability to those things.”

The suspended soil particles carry phosphorus attached to them. The runoff water also contains dissolved phosphorus. Both of these are on their way to Lake St. Clair, then to Lake Erie by way of the Detroit River, increasing the risk of a toxic algae bloom. A lot of the municipal water in Chatham-Kent comes from Lake Erie, so we have a vested interest in its health.

The structure and health of our soils also contribute to this erosion.  Since farming began here, the organic matter content of our soils has fallen to much less than half of what it once was. This loss contributes to the decline of good soil structure, or “tilth”. Soil with tilth does not pack hard and tight. It can breathe, letting air in, which supports vigorous root and crop growth. It is absorbent and lets more water soak in. Less runs off. More is retained to help the crop thrive through the next dry spell. The rest is filtered clean.

This muddy water is easily overlooked. We are so used to this, we see it as normal. It is the built-in result of the way we farm today. When suspended particles silt out, the mouth of the Thames silts up and so do the drainage ditches that farmers rely on to remove excess. Maintenance costs accumulate.

The loss of topsoil is very gradual and is also easily overlooked. It does not affect farming next year or even for decades. We do not have many steep slopes in Chatham Kent, but I can show you spots where the sandy topsoil has been completely eroded away, exposing the clay subsoil below.

On her own, nature builds topsoil at the rate of about 1” in 1000 years. It has been estimated that sandy loam soil farmed conventionally, could erode at the rate of 1 mm per year. At this rate we lose 1” in 25 years. Our generation will not be affected, but our grandchildren inherit a diminished resource.

Now you may be wondering, is there a better way? Yes there is!

The answer is deceptively simple, though changing practises requires planning and investment.

First, reduce or eliminate tillage. Tillage, like plowing or cultivating, dramatically disrupts the soil and its community of microbial life. It causes the oxidation and loss of organic matter. The remedy is the practise of no-till, or strip tillage, both of which leave the soil between the rows of crop undisturbed.

Second. Microbes in the soil play an essential role in making nutrition available to the crop. Different communities of microbes thrive when it is wet, dry, hot and cold. Different species support different communities. Research shows that diversity supports better crops. Therefore, grow a rotation of 3 or more crops, and cover crops with multiple species after the main crop has been harvested.

Third, keep the soil covered at all times. This can be the residue from last year’s crop. Or, plant a multi-species cover crop after harvesting this year’s crop of wheat, tomatoes, or soybeans. Another technique practised by some seed corn growers is to plant cover crop between the rows of growing corn, and the cover crop thrives after the crop is harvested.

All green plants can be thought of as a giant solar panel which captures energy, and uses carbon dioxide from the atmosphere to build new soil organic matter. Employing cover crops extends the season for photosynthesis later toward winter, and begins it earlier in the spring. More CO2 is used and more organic matter is made, which feeds and stimulates the microbial communities in the soil. They make nutrition available for the next crop and transform organic matter into humus, a stable and long-lasting carbon, leading to an upward spiral of soil building and crop production. Changing farming practise in this way protects the soil, cleans up our fresh water, removes carbon dioxide from the atmosphere, and rebuilds soil organic matter. The result is meaningful carbon sequestration.

Some progressive farmers are moving in this direction. But the pace of change is slow, even though with these changes the food producing eco-system will work better and better over time. Global warming threatens, and the window for effective corrective action is short. The way our economic system works, there is no penalty for allowing topsoil to lose organic matter, or wash away. There is no quick reward for the effort and expense to cover it and restore it.

Could this not be changed? With incentives, could not agriculture be mobilized for this important transition? Would not the public financially support such initiative? After all, in the long run, everyone benefits from clean water and sustainable food production.

Bob Kerr has farmed near Chatham for 48 seasons. He was recently inducted into the Kent Agricultural Hall of Fame.

Bob welcomes any comments regarding this article.  He can be reached by email at bob@kerrfarm.ca