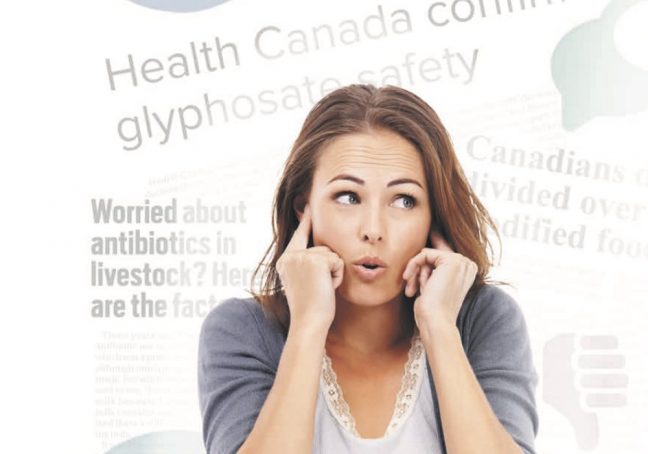 on March 30 | in Ag News | by Jodie Deprez | with Comments Off on Why Won’t Consumers Listen?

It happens at farm meetings across Canada.

This has been happening for years at agricultural conferences across Canada. Because of all those presentations, thousands of producers now use social media to connect with consumers and explain the food production practices on their farm.

But are those efforts making a difference?

When it comes to things like pesticides, hormone use, antibiotics and genetically modified foods, the impact has been minimal.

Why it matters: Consumer perceptions about agriculture have major implications for the future of the industry and for social policy.

“We’ve tracked the level of concern around those four topics… for 10 years and we haven’t really seen any change (in public perception),” said Crystal Mackay, the outgoing president of the Canadian Centre for Food Integrity.

“We don’t see increasing support for agriculture overall, or for specific topics like GMOs, pesticides, antibiotics or hormones.”

That doesn’t mean the social media efforts have been a failure, but it’s becoming clear that social media advocacy, or online “agvocacy,” hasn’t moved the needle.

“Might it be influencing some people? Perhaps. But it’s not influencing the great masses of consumers,” said Mike Von Massow, a University of Guelph economist who studies how people think about food.

Other experts, such as Sylvain Charlebois of Dalhousie University, have also concluded that social media efforts are not working.

That shouldn’t be a shock.

Many people, including prominent scientists, have spent hours talking about the safety of pesticides, GM crops and other agricultural technologies.

“It only took me 12 years, of really working hard to share science and give people facts, to realize that it wasn’t working,” said Kevin Folta, University of Florida horticultural sciences professor, back in 2017. “I was able to preach to the choir. That worked great. The choir was happy… but I wasn’t reaching the people who were just concerned. The people in the middle who didn’t know one way or the other.”

Folta’s experience is an example of a very human phenomenon — it’s hard to change people’s minds about politics, food, religion or anything.

“With the decline in religious belief throughout much of the western world… the body and food are left to carry a tremendous amount of meaning,” wrote Gillian McCann, a Nipissing University professor, in her book, The Sacred in Exile, What it Really Means to Lose Our Religion.

“The tone of conversations around (things like) veganism… shows a marked similarity to other forms of ideological commitment rather than simply a food choice.”

One possible explanation is that Twitter is not the same as television. Nearly everyone has a TV but only 20 per cent of people have a Twitter account. Plus, many Twitter users aren’t typical Canadians, or even human.

“A disproportionate percentage of those people (on Twitter) are either journalists or automatic bots,” said Von Massow.

“I’m on Twitter… and farmers talk to themselves,” Charlebois said. “Whenever I see a post from a farmer, I see a lot of likes and a lot of re-tweets from other farmers… That message is not going out (to the public).”

One of Von Massow’s students described it neatly. She said online discussions about food are basically two monologues, from two separate points of view.

Another challenge is the nature of social media or what some call the democratization of media.

Besides Twitter, Facebook and the usual social media suspects, there are hundreds of other ways for consumers to get information about food, agriculture and nutrition. The categories of smart phone apps for food and nutrition are seemingly endless:

So, a Saskatchewan farmer posting on Facebook about beef production is not going to reach a 20-something in Toronto, who gets her information about food production from an app.

“Through our students we get a little window… to their media world,” said Rene Van Acker, dean of the Ontario Agricultural College. “It is mind boggling… We are not living in the same media world.”

If the agricultural industry committed tens of millions of dollars, and if tens of thousands of producers used social media to connect with consumers, the collective effort might convince a few more Canadians that pesticides, GM foods and growth hormones are safe.

Or maybe there’s another option: accept that consumers fall into different groups and that people in those groups want different things.

“The new reality is micro-marketing and segmentation,” Mackay said. “Amazon has 27 different segments of consumers and they’re going to more (segments). How many segments do we have for beef or grain?”

In 2016, the Earls restaurant chain announced it would serve certified humane beef, bought from accredited American farms that raised cattle without growth hormones, antibiotics and steroids and had their animals slaughtered in a certain way. Earls tried to get the beef from Alberta ranchers, but there wasn’t a sufficient supply.

Canadian cattle producers slammed the decision and vowed to never eat at Earls again. They felt the certified humane label was offensive because it suggested cattle on Canadian ranches are mistreated.

Earls backed down. It apologized and abandoned the certified humane program.

Canada’s beef sector may have viewed it as a win, but there’s another way to look at it: lost customers.

Canadians who care about animal welfare might eat steak — if it came with a humanely raised label. Lacking such an option, they probably opt for plant proteins or fish.

“We saw a company going… to get a product that consumers were looking for… We could have actually grabbed this moment… to recognize the consumer is looking for different things,” Charlebois said, calling it a lost opportunity for Canada’s beef sector.

“We (the ag industry) need to really listen to messages we need to hear, not just messages we want to hear.”

Brenda Tjaden, co-founder of FarmLink Marketing Solutions and chief executive of Sustainable Grain, her new company, said some people in Canada’s ag industry are confused about the nature of the market.

Suppliers don’t dictate the rules about how things are produced. Buyers do.

A harder thing to accept? The crazy and absurd demands of consumers.

For instance, a segment of the public may want chickens kept outside 365 days of the year, Mackay said.

“We know that’s wrong. It’s bad for the birds… It’s bad for human health and food safety,” she said. “But if someone says I’m going to pay $25 per pound for free-range birds that live outside year-round, somebody may want to make that happen.”

While scientific arguments and social media outlets have limitations, people in Canada’s ag industry should keep talking to consumers.

Mackay said this boils down to two choices.

People in the conventional agriculture sector can continue to engage and educate a Calgary mom, to try and sway her opinion.

Or, they can change practices and give her what she wants.

The social media survey: what do Canadians think about agriculture and food?

The Canadian Centre for Food Integrity hired a firm to gather the volume and nature of what Canadians were saying about agriculture and food on social media platforms such as Facebook, Twitter and Instagram.

Using that data, it studied the social media feeds of 250,000 Canadians from January 2017 to January 2019. The study didn’t pose any questions to participants, but instead analyzed the content of discussions already taking place. This is what the study found.

The AI program the research firm used was able to put social media conversations into certain categories or themes. For example, when it comes to GMOs:

“GMOs in food are bad”
• 60 per cent agreed with this sentiment
• 30 per cent disagreed
Total volume of comments: 2.1 million

“Glyphosate”
• 50 per cent opposed the use of glyphosate

This article was originally published on the Western Producer.